May 16, 2022 The Catholic Telegraph
Home»Commentary»The Catholic Moment: Hey, is there some guy in your bed?
Commentary

A few weeks ago, I was caring for my two grandsons. I was putting them to bed and thought it might be nice to start teaching them how to pray. Lewis is 4 and Liam is 2, just the right ages to begin a lifelong conversation with the Divine One. After I had tucked them into their beds, I said (in my softest grandma voice), “Boys, Jesus loves you very much. He will be with you through the night to keep you safe and happy. Let’s tell Jesus we love Him and say good night to Him.” The boys dutifully said, “Good night, Jesus. We love you.”

I turned off the light, turned on the room monitor and left them to God’s care. I went back to the family room and turned on the monitor downstairs only to hear Lewis say to his little brother, “Hey, is there some guy in your bed?” As I laughed about this mysterious “guy,” I realized that these two little boys have no idea who God is or how to talk God’s language. In my reflection on the issue, I thought about how I learned to speak to God. Just how do we begin to understand prayer?

Prayer is talking with God and means learning a language that is very intuitive. Over the years we come to understand concepts like mercy, compassion, providence, grace and many more. But in the beginning, the language of God is very foreign to little souls.

The sad news is that many adults in our culture have never learned how to pray or understand this sacred language. The prayers of the Mass and the concepts of the homily are meaningless to those who do not pray. Those who complain that Sunday Mass is boring and meaningless may not be able to take the words to heart.

What this situation reminds me of is the devastating experience of the Native American children of the last century. These children were removed from their communities and placed in schools far away from their people. They were taken away from their language, rituals and tribal stories and raised as white children. The result was that all the rich heritage of the Native American culture was lost to them. I believe the same thing has happened to many Catholic adults and children. The rich heritage of Catholic ritual, prayer and traditions has been lost to them as they have been immersed in our godless culture.

So, what can we do to rectify the situation for our children and grandchildren? Simply begin to pray again. When I was a child, my parents prayed while I watched and listened. Gradually, I learned by doing.

Young parents will have a tough time of it, as they begin to pray once again. Perhaps it will be their own children who will lead the way to the first conversations with God. I would encourage these young families to pray whenever the need arises: prayers of gratitude at mealtime that come from the heart, not the old standard memorized version; night prayers at bedtime or while watching the night sky together; a prayer for a stranded motorist as you drive by and on and on.

I guess there was some guy in Liam’s bed, the same guy who won my heart as a little girl and the hearts of millions of other children who came to know Him as Jesus the Christ.

Hunt is the catechetical and evangelization advisor for St. Anthony Messenger Press/Franciscan Communications.

Sunday Scripture: Faith and the future 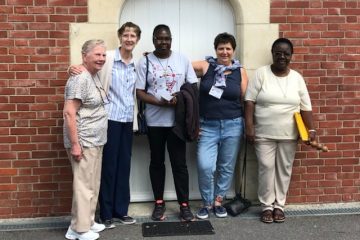