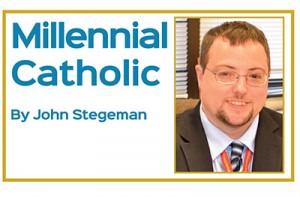 A 24-hour a day Mass times resource that anyone with internet can access is objectively speaking , a great thing. But for the young collegiate Catholic, it is also an excuse killer.

When my parents’ generation went to college, they no doubt did a little research on the parishes near campus, or the school campus ministry if they had one. Mass times were memorized or written down, and I’m sure they did their best to get to Mass. If they overslept, they’d be due for confession, but they could move on with the day.

The millennial college experience was different.

I wasn’t a good Catholic in hindsight. I fell prey to many of the errors in judgment that college boys make and I rarely went to confession. But for some reason I never could let go of the Mass. It was an obligation I still took seriously.

One Sunday, after a particularly late Saturday, I overslept both the Holy Redeemer and St. Mary’s latest Masses. Aware that my town’s two parishes lacked an evening Mass, I panicked. I started thinking about whether or not there was some kind of Eastern rite church around, of if a protestant service could suffice for that day (again, I wasn’t a very good or well-educated Catholic).

Finally, I remembered MassTimes.org. The online resource has been around since 1996 to help Catholics around the U.S. find a Mass near them when they’re away from home. After typing in my zip code (45662 in Portsmouth, Ohio), I realized I was in for a long Sunday.

My options were a Spanish language Mass a county over, a 12:30 I’d have to speed to make 45 minutes north of me, or the same situation across the river in Kentucky. I’m an older millennial, so this is before GPS was on all our phones. I didn’t have time to get to the computer lab to print out directions.

Sure that I’d never find a way to get to Mass, I had basically given up. Something made me type in my home zip code from back in Cincinnati, and the fourth or fifth result down was St. Ignatius of Loyola in Monfort Heights. They had a 7 p.m. Mass.

Now I don’t know how far away a church has to be to not compound the sin of missing Mass in the first place, but in my mind, 230 miles round trip seemed insignificant in the grand scheme. Now armed with the knowledge that there was a Mass I could attend, and somewhere I knew how to find, my soul was convicted and a road trip ensued.

Going to Sunday Mass is a serious obligation, and missing it without a serious reason is sinful. I don’t mean to make light of that, but if we’re being honest, most college kids don’t make it every Sunday. There are many reasons they don’t go, and for many of those reasons there’s nothing we can do.

We can, however, share information. I don’t think we need to require anyone to drive 200 miles, but one way to help the millennials in college is to remove excuses. They can’t tell you, “I didn’t know when Mass was” if you share the resources to find out.

MassTimes.org is still out there doing great work. For anyone in the Archdiocese of Cincinnati, TheCatholicTelegraph.com’s Mass times listing includes not just Mass, but confession availability and updates with special events like Ash Wednesday, Corpus Christi processions etc.

Since we’re talking about Catholics and colleges, there’s more to staying a faithful Catholic than just going to Mass.

Connecting with campus ministry or a parish community while in college is important. Stay involved with your parish if you’re staying at home. If you’re going away to college, check out this resource of campus ministry contacts for schools many Archdiocese of Cincinnati students attend.

Student who does it all likes praising God best

New Vatican instruction: Identity of Catholic schools to be respected by teachers, students 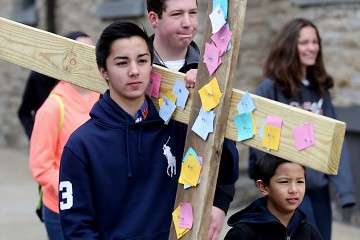