The Synod on Synodality has thus far demonstrated the “joys, hopes, and wounds” shared by members of the Church in the United States, according to a report on the process issued Monday.

The fruit of consultation in the Latin-rite dioceses in the U.S, as well as Catholic associations, organizations, and national ministries, the synthesis noted several themes: enduring wounds, especially those inflicted by the sexual abuse crisis; enhancing communion and participation in the life of the Church; ongoing formation for mission; and engaging discernment.

In a letter prefacing the report, Bishop Daniel Flores of Brownsville, chair of the U.S. bishops’ doctrine committee, wrote that it is “an expression of what we as a Church have heard each other say when asked about our deepest preoccupations and hopes for the Church of which, by the grace of God, we are all a vital part.”

He emphasized that “the publication of this document is not a concluding moment, however; it is a reflective, forward-moving moment. It is an invitation to listen, to discuss together and to discern together as the Church, about how best to understand and act upon those matters that sit deeply in the hearts and minds of Catholics in the U.S.”

The report noted that the abuse crisis “has eroded not only trust in the hierarchy and the moral integrity of the Church, but also created a culture of fear that keeps people from entering into relationship with one another and thus from experiencing the sense of belonging and connectedness for which they yearn.”

Division within the Church was also a major wound, especially related to the use of the Traditional Latin Mass: “The limited access to the 1962 Missal was lamented; many felt that the differences over how to celebrate the liturgy ‘sometimes reach the level of animosity. People on each side of the issue reported feeling judged by those who differ from them.’”

Marginalization was another wound highlighted in the synthesis, with two groups highlighted. The first is those with a lack of social or economic power, “such as immigrant communities; ethnic minorities; those who are undocumented; the unborn and their mothers; people who are experiencing poverty, homelessness, or incarceration; those people who have disabilities or mental health issues; and people suffering from various addictions. Included also in this group are women, whose voices are frequently marginalized in the decision-making processes of the Church.”

The second marginalized group, the report said, “includes those who are marginalized because circumstances in their own lives are experienced as impediments to full participation in the life of the Church. Among these are members of the LGBTQ+ community, persons who have been divorced or those who have remarried without a declaration of nullity, as well as individuals who have civilly married but who never married in the Church.

Regarding greater communion and participation, the synthesis indicated a desire “to be a more welcoming Church where all members of the People of God can find accompaniment on the journey. The synodal consultations mentioned several areas where there existed a tension between how to walk with people while remaining faithful to the teachings of the Church.”

Prominent here was “the desire to accompany with authenticity LGBTQ+ persons and their families” and the “deep need for ongoing discernment of the whole Church on how best to accompany our LGBTQ+ brothers and sisters.”

Greater “leadership, discernment, and decision-making roles for women” were included as a desire in nearly all the synodal consultations.

“Another common hope for becoming a more welcoming Church revolved around removing barriers to accessibility and embracing those with special needs and their families, particularly as it relates to an individual’s sacramental life,” the report highlighted. “One of the regions reported a lack of inclusion because there are so few priests and other ministers who are fluent in American Sign Language. Families expressed great joy when steps of inclusion were taken, while many acknowledged the work still left to be done.”

Greater efforts should be made “to welcome diverse cultural and ethnic communities” and to overcome racism, according to the synthesis.

Concern over young people’s failure to practice the faith was widespread, and “young people themselves voiced a feeling of exclusion and desired to participate more fully as members of the parish community. The feeling of exclusion also manifested itself in some youth seeking a sense of belonging in the Church’s ancient tradition of faith, prayer, and devotion.”

Turning to discernment, the synthetic document said: “The rediscovery of listening as a basic posture of a Church called to ongoing conversion is one of the most valuable gifts of the synodal experience in the United States.”

According to the report, about 700,000 people participated in the diocesan phase of the synod in the U.S., out of 66.8 million Catholics in the country.

The reports of the Eastern Catholic Churches in the U.S. were not included in the National Synthesis; these were shared directly with the Holy See and will be incorporated into the continental stage of the synod.

The national synthesis concludes the diocesan phase of the Synod of Synodality. The continental stage, in turn, will be a preparation for a Synod of Bishops to be held at the Vatican in 2023. 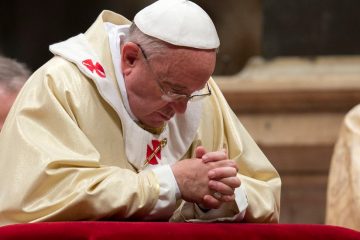