Vatican calls for ‘peaceful and just resolution’ of Belarus crisis

Rome Newsroom, Sep 21, 2020 / 05:00 am MT (CNA).- After President Alexander Lukashenko announced that he was putting troops on high alert and closing Belarus’ borders, a Vatican diplomat called Friday for dialogue and respect for the human rights of Belarusian protesters, who continue to take to the streets more than a month after disputed elections.

“The Holy See … renews its appeal for a peaceful and just resolution to the tensions through sincere dialogue, the rejection of violence, and respect for justice and fundamental human and civil rights,” Archbishop Ivan Jurkovič said in Geneva Sept. 18.

Speaking at the United Nations Human Rights Council’s special debate on Belarus, the Permanent Observer of the Holy See to the United Nations in Geneva said that the Vatican had followed “with great attention the sociopolitical situation following the elections in Belarus.”

“In the search for a peaceable solution to the current crisis, the Holy See considers it indispensable that demonstrators present their requests in a peaceful way. It is also necessary that governing authorities exercise restraint and listen to the voices of their citizens and remain open to their just aspirations, assuring full respect for their civil and human rights,” Jurkovič said.

For six straight weeks, protesters in Minsk have been demanding the resignation of Lukashenko, who has ruled the country since 1994. The protests began after the Aug. 9 election in which Lukashenko claimed victory in the presidential election with 80% of the vote. His challenger, Sviatlana Tsikhanouskaya, complained to electoral officials after they said she had earned just 10% of votes. Fearing imprisonment, she then fled to Lithuania.

The European Parliament rejected the Belarusian election results Sept. 17, passing a resolution saying that it would not recognize Lukashenko as the legitimate president once his current term ends Nov. 5.

Tsikhanouskaya addressed the Human Rights Council Meeting via video link. She spoke of the Belarusian opposition’s “willingness to talk with the authorities and look for peaceful rights-based solutions to the crisis.”

The Belarusian government representative at the UN meeting repeatedly interrupted the video, demanding that it be turned off, reported the Guardian newspaper.

“Belarus needs fast and resolute decisions,” Tsikhanouskaya said. “It’s very important to recognize that standing up for the democratic principles and human rights is not interfering in internal affairs; it is a universal question of human dignity.”

As a result of a vote at the meeting, the UN Human Rights Council adopted a resolution calling on the Belarusian authorities to enter into dialogue with the political opposition and allow for freedom of assembly and expression.

The UN resolution came a week after a senior Vatican official met with with the Belarusian foreign minister in Minsk.

During his four-day trip to Belarus, Archbishop Paul Gallagher met with government officials and Catholic bishops to discuss the future of the Church in the country in the midst of political tumult.

When the Vatican Secretary for Relations with States met with Belarussian bishops at the apostolic nunciature in Minsk on Sept. 12, Archbishop Tadeusz Kondrusiewicz, president of the country’s bishops’ conference, was not present as he has been barred from entering the country by Belarusian authorities since Aug. 31.

L’Osservatore Romano reported Sept. 17 that Gallagher’s meeting with the bishops in Minsk “was very useful in evaluating together the path that the local Church must follow in order to remain faithful to its identity and its evangelical mission, making itself, at the same time, also an effective instrument of social cohesion.”

At the same time as the Vatican official’s visit to Belarus, Lukashenko was in Russia visiting President Vladimir Putin, his closest international ally, who offered him a $1.5 billion loan.

Anaïs Marin, the UN’s special rapporteur on Belarus, said that the human rights situation in Belarus was “catastrophic.” She indicated that more than 10,000 people have been arrested and thousands have reported being “savagely beaten.”

“Let’s not allow another iron curtain to descend on the European continent,” she said.

Vatican calls for ‘peaceful and just resolution’ of Belarus crisis 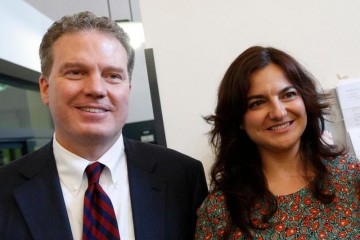