VATICAN CITY — To emphasis that the sacrament of baptism formally brings a person into the church of God and not just into a local Christian community, the Vatican has ordered a slight change of wording in the baptismal rite.

“Baptism is the sacrament of faith in which people are incorporated into the one church of Christ, which subsists in the Catholic Church, governed by the successor of Peter and the bishops in communion with him,” said the decree from the Congregation for Divine Worship and the Sacraments.

The decree is dated Feb. 22 and was published in the latest issue of “Notitiae,” the congregation’s newsletter.

Signed by Cardinal Antonio Canizares Llovera, congregation prefect, and Archbishop Arthur Roche, congregation secretary, the decree said the change to the wording in Latin and all local languages was approved Jan. 28 by Pope Benedict XVI; the pope resigned a month later.

The new wording, the decree said, better emphasizes Catholic doctrine that through baptism a person is incorporated into the universal church and not just into a parish.

Although the rest of the formula remains the same, by beginning with an affirmation of the entire church welcoming the one about to be baptized, the minister also makes clear that the sacrament is being administered in the name of the church and not just in the name of the local community.

Before the change, the approved English text read: “The Christian community welcomes you with great joy. In its name I claim you for Christ our savior by the sign of his cross.”

The decree said the change was to have gone into effect in the Latin text March 31.

Msgr. Rick Hilgartner, executive director of the Secretariat of Divine Worship for the U.S. Conference of Catholic Bishops, said the bishops were due to have a preliminary draft translation of the Rite of Baptism of Children next year, so he believed the change would simply be incorporated in the revised edition as it is approved and published. 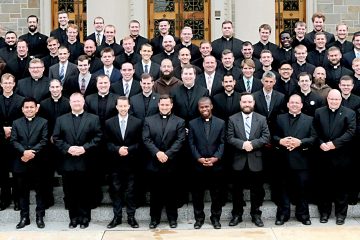