Venerable Fulton Sheen once said that in order to understand the meaning of Christmas, two philosophies of life must first be considered.

One philosophy, Sheen said in one of his many television monologues, is that of man who goes to perfection or happiness or God by and through his own efforts.

It was assumed one would reach happiness by contemplating the gods or by some form of “ascesis and self discipline,” he said. This is the philosophy of Buddhism, Confucianism, Taoism, and the ancient Greeks, he said.

But this philosophy of life is “not very solid,” Sheen argued.

The other philosophy to be considered, and the one that Sheen holds to be true, is that of God coming down to man.

“And this is the true valid experience of the soul,” Sheen said. “For the soul responds to something rather than takes the initiative.”

Sheen said that people often make the mistake of thinking that their virtuous acts are what earn God’s love, but he asserted that “that isn’t the way it operates at all.”

“God loved us first,” he said.

Sheen said that every child who reaches the age of six or seven begins to realize their mother loves them. But the mother always loved them, he said, even before they were born.

Sheen emphasized that religion is “fundamentally a response, rather than an initiative on the part of man.”

Sheen explained to the audience that there is a “hierarchy of creation,” starting with chemicals at the bottom, then plants, followed by animals, and man at the top.

There is a “law” that “runs through the universe,” he said, which states that “nothing ever mounts to a higher level except the higher thing comes down to it.”

Step by step, Sheen explained how each level in the hierarchy of creation can only “live a higher life” if it dies to its lower existence and is in some way brought into communion with the higher being. But for that to happen, Sheen said, the higher being must come down to it.

The process does not stop at man, Sheen said. A higher life exists above man and that is God.

Sheen gave a picturesque overview of the annunciation of the archangel Gabriel to Mary, and marveled over the mystery of divine omnipotence existing as a babe in the manger.

Sheen ultimately concluded that Christ did not come “to make us nice people.” Instead, he “came to make us new men, to change our natures, because everything else in nature is changed by being lifted up.”

“Suppose any of us who are just creatures, just men, certainly began to be children of God, so that the divine nature began to pulsate within us; so that we were lifted up by offering our human nature as Mary offered the first human nature; so that we could in a [inaudible] way be united with the divine person; so that his truth with all that great wisdom would begin to flood our mind and that his will and his love would begin to possess us and would begin to impregnate and suffuse itself over every single love that we had. Oh if that ever came to pass and it does come to pass. That would be the meaning of Christmas,” Sheen said.

In his conclusion, he stated that God came to earth to make us other sons of God, “more than just human beings.”

Those who feel unworthy of God’s love will say that they are a “beast” or “foul” and “dare not be lifted up.”

But Sheen said: “Remember that he was laid in a manger and his companions were beasts. That is our hope, our joy, our peace, our merry Christmas.”

Future at risk for historic chapel in Antarctica 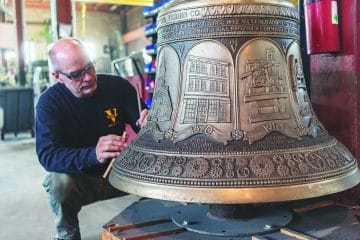