A controversy over a book and statements made on Twitter has recently drawn increased attention to the Vatican’s Pontifical Academy for Life.

In late June, the academy’s official Twitter account began promoting a Vatican-published book synthesizing a 2021 seminar on ethics, in which a participant discussed “the possible legitimacy of contraception in certain cases.”

The pontifical academy said in an Aug. 8 press release that the seminar discussed “all the issues related to the ethics of life … including contraception and sexual matrimonial morality.” Euthanasia was also a topic of the seminar.

Some of the promotional posts for the seminar and subsequent book received pushback in media reports and from Catholic Twitter users who said they presented wrong or confusing information about the Church’s teachings.

The academy’s Twitter account called the negative responses “insults and out-of-control criticism” by “fake accounts.” On Aug. 10, several of the Tweets had been deleted.

A member of the Pontifical Academy for Life, Spanish-based bioethicist Elena Postigo, distanced herself from the book, which is titled “Theological Ethics of Life: Scripture, Tradition, Practical Challenges.“

“The book is not an official statement but the seminar records in which 20 people made their personal statements. Many members didn’t know about it and are astonished,” Postigo shared on Twitter.

What exactly is the institution which started this controversy?

The Pontifical Academy for Life is one of several academic and cultural institutions which bring together experts in their fields to discuss issues of relevance to the Church and the world.

In the document establishing the academy, the motu proprio Vitae Mysterium, he wrote that the institute has “the specific task to study and provide information and training about the principal problems of law and biomedicine pertaining to the promotion and protection of life, especially in the direct relationship they have with Christian morality and the directives of the Church’s Magisterium.”

Venerable Jérôme Lejeune, a French pediatrician and geneticist who opposed the use of prenatal testing for the purposes of carrying out elective abortions, was the academy’s first president, though he died from lung cancer in April 1994, just a few weeks after its founding.

Before his death, however, Lejeune managed to draft the academy’s first bylaws and a declaration to be signed by members of the academy stating that “before God and men we bear witness that for us every human being is a person” and that “from the moment the embryo is formed until death it is the same human being which grows to maturity and dies.”

Pope Francis approved new statutes for the Pontifical Academy for Life in 2016, the first significant reform of the institution since its beginning. The statutes are due to expire at the end of this year, after going into effect on Jan. 1, 2017, for five years.

The use of the declaration of pro-life belief drafted by Lejeune was dropped in the new statutes, and membership in the academy was changed from a lifetime term to a renewable five-year term.

The statutes also say members, or academicians, appointed by the pope, can be of any religion, though they should “promote and defend the principles regarding the value of life and dignity of the human person, interpreted in a way that conforms to the Magisterium of the Church.”

An academician can have his or her membership revoked, the statutes say, “in the case of a public and deliberate action or statement manifestly contrary to said principles, or seriously offensive to the dignity and credibility of the Catholic Church and the Academy itself.”

The academy is headed by president Archbishop Vincenzo Paglia, who Pope Francis appointed in August 2016. Paglia had been president of the Pontifical Council for the Family before it was merged into the Dicastery for Laity, Family, and Life.

Under the president, there is the chancellor, Monsignor Renzo Pegoraro, and a board of directors called the governing council.

With the 2016 reforms, most of the 139 previous academicians’ terms were ended, and new members appointed.

Academicians of the Pontifical Academy for Life can be clergy, religious, or laity and are chosen from among the top experts in law and bioethics issues around the world.

Members are categorized in one of four ways: Ordinary members and honorary members are chosen by the pope. In contrast, corresponding members and young researchers are selected by the academy’s president and governing council.

There are currently 51 ordinary members and two honorary members, according to the Vatican’s 2022 Pontifical Yearbook. Corresponding members appear to be around 90 in number, while there are about 13 young researchers who must be under 35 years old to qualify.

Most members were appointed in the summer of 2017.

Carl A. Anderson, the former Supreme Knight of the Knights of Columbus, is among the academy’s ordinary members after being reappointed in 2017 along with 27 other former members.

Other Americans in the academy include Kathleen M. Foley, a neurologist and secretary of the board of directors of Physicians for Human Rights; John M. Haas, president emeritus of the National Catholic Bioethics Center; and Ignatius John Keown, a professor of Christian ethics at Georgetown University.

Cardinal Willem Eijk, archbishop of Utrecht, Netherlands, and Archbishop Anthony Fisher of Sydney, Australia, are also ordinary members based on their bioethics backgrounds.

Some 2017 appointments to the academy garnered criticism, in particular, that of Nigel Biggar, an Anglican theologian, who has previously supported legalized abortion up to 18 weeks and expressed qualified support for euthanasia.

A few other members, including Father Maurizio Chiodi, have also expressed a belief in the morality of contraceptive use in marriage, which the Catholic Church considers a grave sin.

The changes to the statutes of the Pontifical Academy for Life, the appointment of Archbishop Paglia as president, and the nomination of some non-Catholic members were also the subject of disagreement among some Catholics.

Controversy included disappointment at the removal of French geneticist Lejeune’s declaration of fidelity to the pro-life teachings of the Church.

In an interview with the National Catholic Register in 2017, Paglia defended the revised statutes.

“I think [critics] will find that the new Statutes require a stronger commitment on the part of Members to the Church’s pro-life teaching than do the old,” he said.

“In that context, however,” he added, “I also want to point out that the Academy’s absolute fidelity to the Church’s Magisterium in no way means that we are unable to undertake joint initiatives or enter into dialogue with persons who do not share our Catholic belief and commitment.”

Earlier this year, a Jesuit-run Catholic journal came under fire from over 50 organizations for an article supporting legalized assisted suicide written by a Pontifical Academy for Life member.

In his article, Father Carlo Cassone, SJ, a moral theology professor at Rome’s Pontifical Gregorian University, argued that an Italian bill to legalize assisted suicide could be “an acceptable ‘imperfect’ law.”

The academy’s chancellor, Father Pegoraro, also appeared to express sympathy for the idea in an interview with French Catholic newspaper La Croix.

In another Twitter controversy, the Pontifical Academy for Life received over 200 responses, most negative, to a post on Apr. 6, 2021, marking the death of the dissenting theologian Hans Küng.

The influential and controversial Swiss theologian, who rejected papal infallibility, Catholic teaching on contraception, and the moral impermissibility of assisted suicide, was described on the academy’s Twitter as “a great figure in the theology of the last century whose ideas and analyzes (sic) must always make us reflect on the Catholic Church, the Churches, the society, the culture.”

In 2019, a week after Swiss bishops published guidelines stating pastoral caregivers should not be present during a person’s death by assisted suicide, Pontifical Academy for Life President Paglia told journalists he would be willing to hold the hand of someone dying from assisted suicide, and that he did not see that as lending implicit support for the practice.

Fabrizio Mastrofini has been the Pontifical Academy for Life’s social media manager and press officer since 2017. 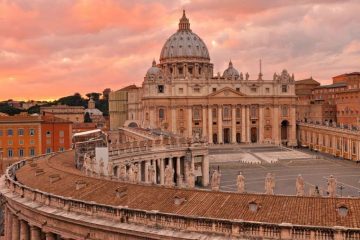