Many journalists would say they have a passion for truth, but for Sr. Mary Ann Walsh, that took on added significance as she worked for the Church she loved.

Ubiquitous in the world of U.S. Catholic media, Sr. Walsh was well-known among Catholic news publications across the country and beyond.

The 68-year old Catholic sister and former director of media relations for the U.S. Conference of Catholic Bishops (USCCB) passed away on April 28 after multiple battles with cancer.

Bishop John Wester, head of the U.S. bishops’ communication committee, said Sr. Walsh’s love for the Church was obvious in her work in Catholic media over the years.

“She was a clear thinker,” Bishop Wester told CNA. “She knew about Church issues (and) could cut right to the chase.”

He said the memories that stuck out most to him were during the U.S. Bishops’ Conference plenary assemblies twice a year. He recalled Sr. Walsh walking through the aisles of bishops, handing our interview requests from various media outlets, “very quietly just moving among us.”

Sr. Mary Ann Walsh, a New York native, joined the Sisters of Mercy at just 17 years of age. As a sister, she earned her master’s degree in English from Albany’s College of St. Rose in 1976 and a master’s degree in pastoral counseling in 1990 from Loyola University in Baltimore.

After working as a school teacher, Sr. Walsh began her career in journalism at a diocesan newspaper in Albany, N.Y. at the age of 30. She then went on to serve at Catholic News Service’s bureau in Rome from 1983 to 1986 and later as a national desk reporter and media editor in the news service’s Washington bureau.

Sr. Walsh went on to work in the media department of the USCCB beginning in 1993, after she successfully coordinated communications for Pope John Paul II’s trip to Colorado for World Youth Day that same year. For the last third of her 21-year tenure there, she worked as the USCCB’s media director, the first woman to hold that position since the founding of the organization in 1966. A little less than a year ago, in July 2014, she stepped down from the position and became the U.S. correspondent for the weekly Jesuit-run “America” magazine.

“She was a very gifted journalist herself,” Bishop Wester said. “She had the respect of the other journalists.”

“We are grateful to God for our time with her on this earth while remaining confident that her legacy will live on in those who were fortunate to encounter her witness to the Gospel message and her tremendous impact on Catholic media,” the Catholic Press Association said in a statement mourning her death.

Sr. Walsh’s work has been published in the Washington Post, USA Today, and Editor and Publisher. Besides her work in journalism, she also edited three books: Pope John Paul II: A Light for the World; From John Paul II to Benedict XVI: An Inside Look at the End of an Era…; and Benedict XVI: Essays and Reflections on His Papacy.

Bishop Wester said during her time with the U.S. Bishops’ Conference, Sr. Walsh served the bishops “beautifully and well,” and that they felt comfortable in her care.

“She had the gift of gentleness and kindness,” he said, “but she also knew how to get the job done.”

Although she was known for her compassion and for having an “eye for the little guy,” Sr. Walsh was also unfailingly fair in her life and her media coverage, Bishop Wester added.

“She was dedicated to the truth,” he said. “She was not swayed by political wins or whatever was in vogue at the moment. I admired that in her.” 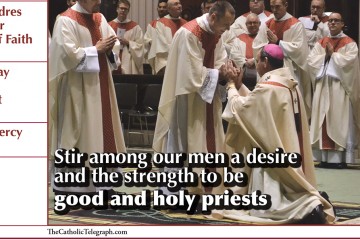