When Deacon Dominic Vu of St. Matthias Church first noticed a few Hispanic families attending Mass at the end of 2017. He thought they were acquaintances of then-temporary pastor, Father Mike Pucke, who celebrated Mass in Spanish at St. Julie Billiart Church in Hamilton.

Subsequently, several leaders in the Hispanic community asked Father Lambert Ulinzwenimana, parochial vicar of Our Lady of the Rosary Church, and Vu for a meeting to discuss renting a place where the Spanish-speaking community could worship. According to Vu, Father Ulinzwenimana suggested the group join St. Matthias Church and “feel at home here to come to worship with the parish.” 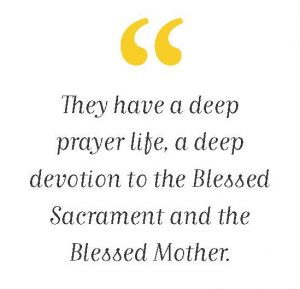 Vu suggested families register as members after Sunday Mass. The first group to register totaled 24 families – but it didn’t stop there. Every weekend, more families signed up, and they continued to do so for the next two years.

“We added an afternoon Spanish Mass [at OLOR] and before we knew it, that one had grown from about 20 people to 275 people,” said Father McCullough.

And the numbers tell the story. According to David Crowe, business manager for WWPR, from 2016 to 2019, Mass attendance increased 80-percent at St. Matthias, and 60-percent at Our Lady of the Rosary, with Hispanic families making up the majority of those attending.

“It’s been chaotic, at times. It’s been difficult because there’s certainly been change and kind of shifting sands underneath us, but there’s not a lot of places in the archdiocese where we’re seeing parishes double or triple in size, and so I’m excited about it,” said Father McCullough.

Samuel Vasquez, managing director of Hispanic Evangelization for the Archdiocese is excited about the possibilities with the Hispanic community in Cincinnati. “Hispanics are an emergent population in the interior of the United States with vast potential for growth if there is an adequate pastoral response by the local Church,” he said. “They bring with them a profound faith and a desire to want to serve the Church and pass on their faith to their children.”

Graciela Villegas, along with her husband and two children, attends OLOR and noticed the incredible increase in Mass attendance over a one-week period. She said she and her husband finally received the Sacrament of Marriage after 15 years together, a common theme in the Latino communities of the U.S., where the faithful often do not receive sacraments because of the language barrier. “[Priests] are helping a lot of kids who are almost teenagers get baptized,” said Villegas

Additionally, Hispanic parishioners rented the former Sacred Heart Radio studio at the Holy Spirit Center in Norwood in order to evangelize through live social media channels, according to Father McCullough. That has resulted in house blessings, sacramental marriages and invitations to join parishes.

“They are moving and shaking in terms of new evangelization,” said Father McCullough. “They have a deep prayer life, a deep devotion to the Blessed Sacrament and the Blessed Mother, and they are not afraid or embarrassed to share it with the people they’re working with. It’s bringing new people to the Church.”

Ministering to the Latino community has even inspired some staff members to learn Spanish. Father McCullough said sometimes, he’ll go to the office and they’ll share a “victory” story of being able to communicate effectively with a parishioner.

Father McCullough said he and Parochial Vicar Father Jeff Stegbauer talk about planting the seeds for future vocations, and ask parishioners to pray about it. He related the story of a 12-year-old boy who consistently brings items such as statues and trinkets to be blessed. “Last time I was blessing something for him, I asked him in Spanish, ‘What are you going to do when you grow up?’ and he said, ‘lo que tu haces,’ – ‘What you do,’ ” said Father McCullough.

“It would be a beautiful thing to see more…vocations come up out of this,” said Father McCullough. “So, fingers crossed… so fingers crossed, we’re praying and hoping it starts to bear fruit, too.”

The Richest Versions of Ourselves