November 26, 2022 The Catholic Telegraph
Home»Vocations»‘A simple priest of the Church’: Papal preacher prepares to be made a cardinal
Vocations

‘A simple priest of the Church’: Papal preacher prepares to be made a cardinal

Vatican City, Nov 19, 2020 / 11:00 am MT (CNA).- For more than 60 years, Fr. Raniero Cantalamessa has preached the Word of God as a priest — and he plans to continue doing so, even as he prepares to receive the cardinal’s red hat next week.

“My only service to the Church has been to proclaim the Word of God, so I believe that my appointment as cardinal is a recognition of the vital importance of the Word for the Church, more than a recognition of my person,” the Capuchin friar told CNA Nov. 19.

The 86-year-old Capuchin friar will be one of 13 new cardinals created by Pope Francis in a consistory on Nov. 28. And though it is customary for a priest to be ordained a bishop before receiving the red hat, Cantalamessa has asked Pope Francis for permission to remain “a simple priest.”

Because he is over the age of 80, Cantalamessa, who delivered exhortations to the College of Cardinals before the 2005 and 2013 conclaves, will not vote in a future conclave himself.

Being chosen to join the college is considered an honor and recognition for his faithful service over 41 years as Preacher of the Papal Household.

Having delivered meditations and homilies to three popes, Queen Elizabeth II, many bishops and cardinals, and countless laity and religious, Cantalamessa said that he would continue as long as the Lord allows.

The Christian proclamation always requires one thing: the Holy Spirit, he said in an email interview with CNA from the Hermitage of Merciful Love in Cittaducale, Italy, his home when he is not in Rome or giving talks or sermons.

“Thus the need for every messenger to cultivate a great openness to the Spirit,” the friar explained. “Only in this way can we escape human rationales, which always try to exploit the Word of God for contingent, personal, or collective purposes.”

His advice for preaching well is to start on your knees “and ask God what is the word he wants to make resound for his people.”

You can read the full CNA interview with Fr. Raniero Cantalamessa, OFM. Cap., below:

Is it true you asked to not be ordained a bishop before being made a cardinal in the upcoming consistory? Why did you ask the Holy Father for this dispensation? Is there a precedent?

Yes, I asked the Holy Father for a dispensation from the episcopal ordination provided for by canon law for those who are elected cardinal. The reason is twofold. The episcopate, as the name itself implies, designates the office of the person in charge of overseeing and feeding a portion of Christ’s flock. Now, in my case, there is no pastoral responsibility, so the title of bishop would have been a title without the corresponding service that it implies. Secondly, I wish to remain a Capuchin friar, in habit and in the rest, and the episcopal consecration would have legally placed me outside the order.

Yes, there have been some precedents for my decision. Several religious over the age of 80, created cardinals with the same honorary title as me, have requested and obtained dispensation from episcopal consecration, I think for the same reasons as mine. (Henri De Lubac, Paolo Dezza, Roberto Tucci, Tomáš Špidlík, Albert Vanhoye, Urbano Navarrete Cortés, Karl Josef Becker.)

In your opinion, will becoming a cardinal change something about your life? How do you intend to live after receiving this position of honor?

I believe it is the desire of the Holy Father — as it is mine too — to continue my style of life as a Franciscan religious and a preacher. My only service to the Church has been to proclaim the Word of God, so I believe that my appointment as cardinal is a recognition of the vital importance of the Word for the Church, more than a recognition of my person. As long as the Lord gives me the opportunity, I will continue to be the Preacher of the Papal Household, because this is the one thing that is required of me, even as a cardinal.

Over your many years as the papal preacher, have you changed your approach or the style of your preaching?

I was appointed to that office by John Paul II in 1980, and for 25 years I had the privilege of having him as a listener [to my sermons] every Friday morning during Advent and Lent. Benedict XVI (who even as a cardinal was always in the front row for the sermons) confirmed me in the role in 2005 and Pope Francis did the same in 2013. I believe that in this case the roles are reversed: it is the pope who, truthfully, gives a sermon to me and to the whole Church, by finding the time, despite his immense pile of commitments, to go and listen to a simple priest of the Church.

The office which I have held has made me understand firsthand a characteristic of the Word of God frequently emphasized by the Fathers of the Church: its inexhaustibility (inexhaustus, inexhaustible, was the adjective used by them), that is, its capacity to always give new answers according to the questions which are asked, in the historical and social context in which it is read.

For 41 years I have had to give the Good Friday sermon during the liturgy of the Passion of Christ in St. Peter’s Basilica. The biblical readings are always the same, yet I must say that I have never found it difficult to find a particular message in them which responded to the historic moment the Church and the world were going through; this year, the coronavirus health emergency.

You ask me if in many years my style and my approach to the Word of God has changed. Certainly! St. Gregory the Great said that “Scripture grows with the one who reads it,” meaning, it grows at the measure it is read. Advancing in years, you advance also in comprehension of the Word. In general, the tendency is to grow toward a greater essentiality, that is, the need to get always closer and closer to the truths which really matter and which change your life.

In addition to preaching at the Papal Household, during all these years I have had the occasion to speak to all kinds of audiences: from a Sunday homily given in front of about 20 people in the hermitage where I live to Westminster Abbey, where in 2015 I spoke before the general synod of the Anglican Church in the presence of Queen Elizabeth and Primate Justin Welby. This taught me to adapt to all types of audiences.

One thing remains identical and necessary in every form of Christian proclamation, even in those made through the means of social communication: the Holy Spirit! Without it everything remains a “wisdom of words” (1 Corinthians 2:1). Thus the need for every messenger to cultivate a great openness to the Spirit. Only in this way can we escape human rationales, which always try to exploit the Word of God for contingent, personal, or collective purposes. This would be “watering down,” or, according to another translation, “trading on” the Word of God (2 Corinthians 2:17).

What advice would you give to priests, religious, and other Catholic preachers? What are the principal values, the necessary elements, for preaching well?

There is advice I often give to those who must announce the Word of God, even if I am not always good at observing it myself. I say there are two ways to prepare a homily or any type of announcement. You can sit down, choosing the theme based on your experiences and knowledge; then, once the text is prepared, get on your knees and ask God to infuse his grace into your words. It is a good thing, but it is not a prophetic method. To be prophetic one must do the reverse: first, get on your knees and ask God what is the word he wants to make resound for his people. As a matter of fact, God has his word for every occasion and he does not fail to reveal it to his minister who humbly and insistently asks him for it.

At the beginning it will only be a small movement of the heart, a light that ignites in the mind, a word of the Scripture that attracts the attention and sheds light on a lived situation or an event taking place in society. It seems just a small seed, but it contains what people need to hear in that moment; at times it contains thunder which shakes even the cedars of Lebanon. After that, one can sit down at the table, open one’s books, consult notes, collect and organize one’s thoughts, consult the Fathers of the Church, the teachers, sometimes the poets; but now it is no longer the Word of God which is at the service of your culture, but your culture which is at the service of the Word of God. Only in this way does the Word manifest its intrinsic power and become that “double-edged sword” of which Scripture speaks (Hebrews 4:12).

‘A simple priest of the Church’: Papal preacher prepares to be made a cardinal

‘Is Jesus’ body in space?’ And other Ascension questions you didn’t know you had 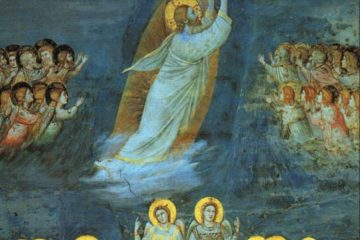