By Courtney Mares Vatican City, Dec 5, 2019 / 10:40 am (CNA).- Ahead of the Vatican Christmas tree lighting Dec. 5, Pope Francis expressed hope that the nativity scene in St. Peter’s Square will serve as a reminder of what Christmas is truly about.

A nativity scene “is a genuine way of communicating the Gospel, in a world that sometimes seems to be afraid of remembering what Christmas really is, and blots out the Christian signs to only keep those of a banal, commercial imagination,” Pope Francis told an Italian delegation at the Vatican for the Christmas tree lighting ceremony Dec. 5.

This year’s Vatican Christmas tree comes from the northern Italian region of Vicenza, which was greatly damaged by storms in October 2018. The red spruce in St. Peter’s Square is a little over 85 feet tall.

The Christmas tree lighting ceremony also revealed a life-size nativity scene carved out of wood with tree trunks from Vicenza placed in the background in memory of the storm.

“The wooden trunks, coming from the areas hit by the storms, which form the backdrop to the landscape, underline the precariousness in which the Holy Family was found on that night in Bethlehem,” Pope Francis said.

Pope Francis met with delegations from the Italian diocese of Trento, Padua and Vittorio Venetoin at the Vatican’s apostolic palace Dec. 5 before the Christmas tree and nativity scene were presented.

“Today’s meeting offers me the opportunity to renew my encouragement to your people, who last year suffered a devastating natural disaster, with the demolition of entire wooded areas,” Pope Francis told the delegation.

“I was pleased to learn that, replacing the plants removed, 40 fir trees will be replanted to replenish the woods severely damaged by the storm of 2018,” he said.

The Vatican Christmas tree is illuminated by energy-saving Christmas lights from the German multinational OSRAM, to reduce the environmental impact of the display.

Pope Francis began Advent with a trip to the Italian town of Greccio, where St. Francis of Assisi created the first nativity scene in 1223. In Greccio, Pope Francis signed the apostolic letter, Admirabile signum, on the meaning and importance of nativity scenes.

“All those present experienced a new and indescribable joy in the presence of the Christmas scene. The priest then solemnly celebrated the Eucharist over the manger, showing the bond between the Incarnation of the Son of God and the Eucharist,” Pope Francis wrote in the letter describing the St. Francis’ first nativity.

“As we contemplate the Christmas story, we are invited to set out on a spiritual journey, drawn by the humility of the God who became man in order to encounter every man and woman. We come to realize that so great is his love for us that he became one of us, so that we in turn might become one with him,” Pope Francis said. 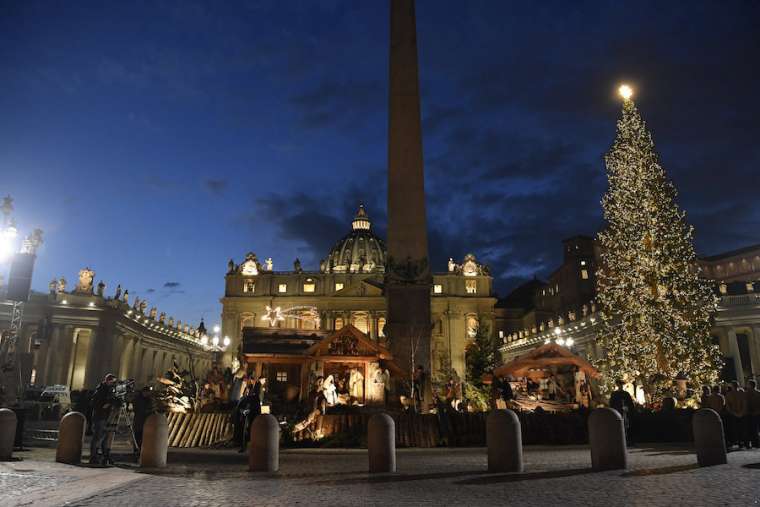 'The key is not to fight, but just to bear witness': How to preach Advent