WASHINGTON — Lawmakers and those who serve justice must make decisions based on their strong faith and moral convictions, and not on popular cultural trends, Archbishop Timothy P. Broglio said Sept. 30 at the 60th annual Red Mass in Washington.

“The faith we hold in our hearts must motivate the decisions, the words, and the commitment of our everyday existence,” he said. “That existence is extraordinary, because it is infused with divine grace.”

Archbishop Broglio, who heads the U.S. Archdiocese for the Military Services, was the homilist and Cardinal Donald W. Wuerl of Washington was the principal celebrant at the annual Red Mass at the Cathedral of St. Matthew the Apostle.

It is celebrated each year on the Sunday before the first Monday in October, when the Supreme Court begins its new term, to offer prayers and invoke the Holy Spirit on those who serve in the judiciary.

Cardinal Wuerl invoked “God’s blessing on those who are involved in the administration of justice” and also asked “prayers for our nation.”

Speaking to more than 1,300 people — many of them federal officials or public servants — who attended the Mass in Washington, Archbishop Broglio said that “not everything contemporary is good and … stable foundations are essential.”

“Our society must also rest on stable, clear foundations,” he said. “Otherwise, we run the risk of sinking into the mire of one popular sound bite after another.”

During the Mass, prayers were offered for the president, vice president and “all those who hold the sacred trust of governance” and for “the protection of all human rights, including the right to life.”

Quoting Baltimore Archbishop William E. Lori, chairman of the U.S. bishops’ Ad Hoc Committee on Religious Liberty, Archbishop Broglio told those at the Mass that “we must be loyal Americans by being bold and courageous men and women of faith and conviction regarding the ethical norms that guide society and its choices.”

“There is so much that we bring to the discourse of our society. Our faith expresses itself in worship, but also in witness,” he said. “We cannot separate who we are from how we live.”

He asked those who administer justice to “welcome the strength of the Holy Spirit and the interior dynamism with which he fills our hearts” so that they live lives that are “truly noble, worthy of God, and of the vocation he has given us.”

“We are here primarily to pray with you and for you as you execute the daunting task assigned to you at various levels,” Archbishop Broglio said. “We beg a blessing for all of you and for all of those who assist you in this important ministry.”

The U.S. Archdiocese for the Military Services provides pastoral ministries and spiritual services to those in the U.S. armed forces. The archdiocese serves 1.8 million men, women and children in more than 220 installations in 29 countries, patients in 153 Veterans Affairs Medical Centers, and federal employees serving outside the boundaries of the United States in 134 countries.

The annual Mass is sponsored each year by the John Carroll Society, a Washington area organization that provides spiritual, intellectual, charitable and social opportunities for Catholic professionals and business men and women in service to the archbishop of Washington.

The Mass gets its name from the color of the vestments worn by the celebrants, with red representing the Holy Spirit and the tongues of fire that descended upon the apostles. The Mass is an ancient tradition that began in Europe. In the U.S., the Mass was first celebrated in New York City in 1928 and first celebrated in Washington in 1953.

After the Mass, the John Carroll Society sponsored a brunch, honoring local law professionals with the Archdiocesan Legal Network, a program of Catholic Charities of the Archdiocese of Washington. Each year, more than 5,000 people in need receive about $8 million in free legal services through the generosity of more than 800 volunteer attorneys and 57 law firms.

Modern Nativity Exhibit on Display at the Maria Stein Shrine 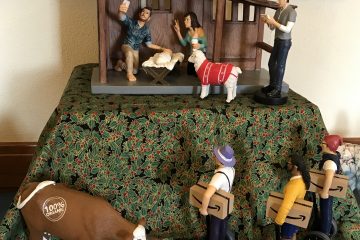