The apology comes nearly two years after Pope Francis accepted his resignation amid accusations of personal and financial misconduct.

The letter from Bransfield, dated August 15, was released by his former diocese on Thursday, along with a letter from his successor, Bishop Mark Brennan, outlining how Bransfield will “make amends” following an investigation into his conduct by the Vatican.

“I am writing to apologize for any scandal or wonderment caused by words or actions attributed to me during my tenure as Bishop of the Wheeling-Charleston Diocese,” said Bransfield, who led the diocese from 2005 to 2018, when Pope Francis accepted his resignation just after Bransfield turned 75.

Bransfield did acknowledge that, during his tenure, “I was reimbursed for certain expenditures that have been called into question as excessive,” but insisted that he “believed that such reimbursements to me were proper.”

After Pope Francis accepted Bransfield’s resignation in 2018, Archbishop William Lori of Baltimore was ordered to investigate allegations that Bransfield had sexually harassed adult males and misused diocesan finances during his tenure. Investigators established that the bishop had engaged in a pattern of sexual malfeasance and serious financial misconduct.

In March, 2019, Lori banned Bransfield from public ministry within the Diocese of Wheeling-Charleston and the Archdiocese of Baltimore. In July of that year the Vatican imposed additional sanctions, including a ban on Bransfield living in his former diocese.

Bransfield has denied the allegations of sexual harassment of seminarians and priests. He has said his staff was responsible for diocese’s finances.

The bishop also acknowledged in his Aug. 15 letter that “there have been allegations that by certain words and actions I have caused certain priests and seminarians to feel sexually harassed.”

“That was never my intent,” he said, adding that “if anything I said or did caused others to feel that way, then I am profoundly sorry.”

Bransfield is reported to have sexually harassed, assaulted, and coerced seminarians, priests, and other adults during his thirteen years as Bishop of Wheeling-Charleston.

As head of the diocese, Bransfield spent thousands of dollars on jewelry and other clothing, including spending more than $60,000 of diocesan money at a boutique jeweler in Washington, D.C. during his time in office.

He also spent nearly $1 million on private jets and over $660,000 on airfare and hotels during his 13 years as Bishop of Wheeling-Charleston. He often stayed in luxury accommodations on both work trips and personal vacations, and gave large cash gifts to high-ranking Church leaders, using diocesan funds.

According to Brennan’s letter, Bransfield was required by the Vatican to “make a public apology to the people of the Wheeling-Charleston Diocese for the scandal he created. He is urged as well to apologize privately to certain individuals who reported abuse and harassment.”

Brennan said that Bransfield had also been ordered to repay his former diocese $441,000 “for unauthorized benefits received from diocesan resources,” confirmed he had done so, and said the funds “will be added to those already set aside by the sale of his former residence for assistance to victims of abuse.”

Brennan also confirmed that Bransfield will continue to receive $2,250 in a monthly stipend, in line with the amount recommended by the USCCB for retired bishops, and would still be covered by the diocesan health insurance plan.

“However,” Brennan wrote, “no other benefits, such as for a secretary or travel, will be provided.”

The release of the letters from both Brennan and Bransfield follows a July 28 letter in which Brennan said neither he nor the apostolic nuncio had heard anything from the Holy See for more than five months regarding his plans for Bransfield to make amends.

In his letter Thursday, Brennan thanked Pope Francis and the Congregation for Bishops for agreeing to the final terms of the settlement, and said that it accepted “in large part the outline of the amends plan I presented to Bishop Bransfield in November, 2019.”

“That plan combined an insistence on restorative justice with a gesture of mercy, which is how God deals with all of us,” Brennan said.

It has previously been reported that Brennan’s 2019 plan included a provision that Bransfield repay nearly $800,000 to the diocese.

“I hope that the people of the Diocese of Wheeling-Charleston will see in the decision of the Congregation for Bishops a fair and reasonable resolution of this unseemly matter,” said Brennan.

'Go to Joseph': Diocese of Lafayette kicks off Year of St Joseph 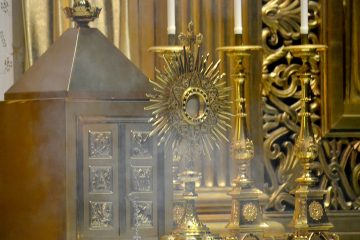