On the morning of April 2, the faithful of Ohio woke to a surprise: Father Earl K. Fernandes, a priest of the Archdiocese of Cincinnati, was designated by Pope Francis as Bishop-elect of the Diocese of Columbus. Although many in southwestern Ohio are sad to say goodbye to Bishop-elect Fernandes, the overwhelming responses expressed great joy for him.

In a special interview with The Catholic Telegraph, the man known for always smiling and radiating the joy of Christ shone while he spoke about his early life as a child of immigrant parents, who instilled the Catholic faith from a young age.

“My parents and brothers are immigrants from India. My father came to the United States in January 1970. The Vietnam War was on. There was a shortage of physicians in this country because of the war, and so green cards were being granted to people from India, Philippines, Pakistan because they spoke English,” said Bishop-elect Fernandes. “We went to St. Thomas Aquinas Church on the eastside of Toledo, right next to a Sun Oil refinery. … My father never let us tell anyone what he did for a living. And we lived pretty simply, and my parents were very devout people.”

His parents passed on their faith to their children through consistent prayer, including nightly family rosaries that concluded with the Angelus, as well as prayers for world peace, the souls in purgatory and the family’s intentions. Bishop-elect Fernandes spoke of his childhood with both solemnity and humor, “We’d have to kneel there on our floor and our knees would hurt. And we tried to say our Hail Mary really fast, and if my dad couldn’t understand us, he would say, ‘Repeat.’ If he said repeat three times, he’d take off a slipper and [wave it at us].”

As he grew, the Fernandes family remained close to their church. Bishop-elect Fernandes laughed as he recalled, “When I got to be in eighth grade, my classmates and I tried to predict what we’d be in 50 years and my classmates predicted I’d be the first American pope!”

He felt tugs toward a religious vocation throughout his young adulthood, talking to vocations directors throughout high school and college. While studying in Manchester, England, Fernandes made his first trip to Rome.

“Just before Christmas I was in Rome, and I remember walking into St. Peter’s Basilica for the first time. I remember how quickly my heart started to beat…. And I came to the tomb of St. Peter. And I fell to my knees, and then I knew that God’s really calling me to be a priest.”

Despite that overwhelming feeling, Fernandes continued with his medical degree at the University of Cincinnati. Through the local vocations director’s promptings, he spent a year at a discernment house in Rome.

“At the end of that year, I decided to come back to Cincinnati and begin the seminary. And so I began the seminary in 1997, and was ordained in 2002. During that time, I spent a pastoral year at Assumption Church in Mount Healthy.”

There, he befriended his long-time mentor, Msgr. Amann. “To see how faithful he was, even with great pain, made a profound impression on me. He never missed a genuflection. He would do sick calls, and once, when an elevator was broken, he climbed seven flights of stairs to bring an elderly woman communion… And so, when I became a priest, Monsignor gave me his chalice, and so I remember him during Mass and I’m very grateful to him.”

The newly ordained Father Fernandes was appointed to Holy Angels Parish and as chaplain to Lehman Catholic High School in Sidney, OH. He spent 2004 to 2008 in Rome for further studies, then taught moral theology and served as academic dean at Mount St. Mary’s Seminary & School of Theology in Cincinnati. During that time, he also helped at Guardian Angels Parish across the street from the seminary.

Father Fernandes’ life took another unexpected turn in 2016: The apostolic nuncio, Archbishop Vigano, requested Father Fernandes to serve as a secretary at the nuncio’s office in Washington D.C.

“Early on, because of the transition from Archbishop Vigano to Archbishop Pierre [at the nuncio’s office], I didn’t have very much to do,” said Bishop-elect Fernandes. “And I’m a workaholic and so I was absolutely bored. And now, looking back on it, I think what God was maybe wanting me to do is to be still and know that He is God. And so I had to learn how to not work, how to be, how to pray, how to shut down the computer. And then eventually Archbishop Pierre came and got into his stride and we began to work very well together.”

Called back to Cincinnati in 2019 to serve as St. Ignatius of Loyola Parish’s pastor, Fr. Fernandes took over on the heels of a sexual abuse scandal. He had a lot to do to restore the parish’s stability, which he did, reigniting ministries and helping straighten out finances. He also kept regular contact with Archbishop Pierre, phone calls between them were quite usual. So, Father Fernandes didn’t think much of it when the phone rang on March 21.

“I said, ‘Excellency, how are you?’ And he said, ‘Where are you? … Are you alone?’ … And all of a sudden, I got this burning sensation in my gut. And he said the Holy Father has nominated you as the next Bishop of Columbus. And then there was this kind of pause, and I looked up at a picture [taken] after my Mass of Thanksgiving at my home parish up in Toledo with my parents. And then I looked over at the crucifix on my desk and I said, ‘I accept.’ And he said, ‘We worked together well at the nunciature. You know the mind of Pope Francis. Your experience at the nunciature and even these years in the parish will have prepared you. You’ll be fine.’”

Bishop-elect Fernandes continued, “I said, ‘Excellency… One of my last substantive conversations with my father before his death, I asked him, “Is there anything that you want from me?”… And then my father held my hand and he said, “I don’t know what the Holy Father will ever do in your regard, but if he does ask, you must accept. We have these problems in the Church. We need good shepherds. And if he asks, you remember the humble origins of your family. You remember your faith. Above all, you remember Jesus Christ.’” In some ways he was prophetic.”

As Bishop-elect Fernandes prepares for his episcopal ordination in Columbus on May 31, he plans to draw on his experience as a pastor and high school chaplain and on his work in the nuncio’s office.

“Part of being a bishop or a priest, a Christian, is to facilitate the encounter with the person of Jesus Christ that opens up new horizons for life and gives our life this decisive direction. … Christ is made present in the human reality through His church, and God’s grace comes to us in the human reality. And so to engage reality, and to help people experience God’s grace in this reality, is what I hope to be spending the next 25 years of my life and priesthood and episcopal ministry in Columbus doing.”

Note: This article is only a small portion of our interview with Bishop-Elect Fernandes. Much more will be shared in The Catholic Telegraph’s June issue and through online videos. Stay tuned!

Way of the Cross: The Fourth Station 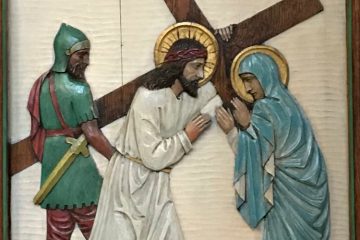