During his visit, the University of Dayton honored the cardinal with the Archbishop Oscar Romero Human Rights Award. Cardinal Rodríguez is the Archbishop of Tegucigalpa and president of Caritas Internationalis, He was appointed by Pope Francis to chair the newly established commission of cardinals as special advisors to the Holy Father. The cardinal is also a member of the Salesians and serves on a number of Vatican congregations, including the Congregation for Consecrated Life.

“Thank you to the University of Dayton for this great honor,” Cardinal Rodríguez said, during the March 10 award presentation. “Oscar Romero is the one person who has inspired the work of Caritas the most. He was an inspiration to the poor throughout the world. His teachings are so rich that you can always find new insights that support our work on social justice.”

The university created the Oscar Romero Human Rights Award in 2000 to honor the ministry and martyrdom of the Salvadoran archbishop. He was slain 35 years ago while officiating Mass because of his vocal defense of the human rights of the poor and disenfranchised. The award is presented to an individual or organization that has earned distinction for the promotion of the dignity of all human beings and alleviation of the suffering of the human community.

Pope Francis officially designated Archbishop Romero a martyr in February. His beatification, the last step before sainthood, will take place in San Salvador on May 23.

“We are honoring Cardinal Rodríguez Maradiaga for his lifetime of human rights advocacy, and especially the way he continues to challenge leaders of prosperous nations to increase aid to poor countries,” said Mark Ensalaco, director of human rights research in the University of Dayton Human Rights Center and creator of the award. “Both Pope Benedict and Pope Francis hold Caritas Internationalis’ work in high regard for its ability to respond to the needs of the poor. Pope Francis has called it ‘an essential part of the church.”

“For me, that phrase, itself, has impressive power,” Cardinal Rodríguez said. “… Jesus shows us that He is sensitive to the needs of those persons who come out to encounter Him.”

The cardinal referred to what Pope Francis called the “paradox of abundance:” that there is enough food in the world to feed us all, yet one-third is unavailable due to things like wastefulness. Hunger causes many injustices, including robbing children of the ability to fully develop their mental capacities.

“There are people not only far away, but also here close who hunger for bread and who experience real difficulties to get through the month and need our economic support in order to live with dignity,” he said.
“We need actions, not only pious arguments, which is where Caritas comes to the table,” he said, citing the pope’s support of a world campaign against hunger.

And we need world leaders as well as individuals to be sensitive to those we encounter as Jesus did. Perhaps, he said, many of us could share more and live with less.“Each of us has to find their own bread and their own fish and believe that, when they are shared, the Lord multiplies them in unsuspecting ways.”

In honor of the Year of Consecrated Life, Cardinal Rodriguez also spoke to approximately 110 women and men religious representing communities from throughout the archdiocese at the Athenaeum of Ohio March 11. His topic was “The Joy of a Consecrated Life: New Wine in New Wineskins.”

“The cardinal is a knowledgeable, thoughtful and motivating speaker. I came away inspired and renewed in my vocation as a woman religious,” said Sister of Notre Dame de Namur Marilyn Kerber, director of the archdiocesan Office of Religious. “He called this a year of grace and spoke to Pope Francis’ goals for the Year of Consecrated Life, elaborating on each one: “Remember the Past,” “Live Passionately in the Present,” and “Embrace the Future with Hope.” He echoed the pope’s call to consecrated women and men to live their vocation with joy. And the cardinal encouraged us to cultivate joy through a life of prayer and gratitude. He said that to be holy is our call and that women and men religious become so by following Jesus in the spirit of our founders and through participation in the life of the church.”

Cardinal Rodríguez was blunt during his delivery of the LaBlond Lecture at the Athenaeum of Ohio March 11.

Discussing the vision of Pope Francis for the Roman Catholic Church two years after his elevation, the cardinal said, “Many ask if Francis will lead a big revolution. My friends, the revolution has already started,” Cardinal Rodriguez said to the crowd gathered in St. Gregory the Great Chapel at the Athenaeum.

However, while many speculate that the transformation of the church will be doctrinal, what Francis seeks, the cardinal said, is a “radioactive faith.”

Cardinal Rodriguez opened the lecture with a review of his history as it paralleled the rise of Jorge Mario Bergoglio through the conclave that elected Pope Benedict XVI in 2005 and the conclave of 2013 that came upon Pope Benedict’s retirement.

The cardinal, who heads a commission of cardinals leading the charge to reform the Vatican Curia, said there was great surprise when then-Cardinal Bergoglio chose the name “Francis” because he greatly admired St. Francis of Assisi, who shared the view that the church should be “a poor church for the poor.”

Ted Bergh, executive director of Catholic Charities of Southwest Ohio, was pleased to hear the both the cardinal and pope’s emphasis on taking care of the poor. “The cardinal, who is also the director of Caritas International, is inspiring by his dedication to the poor and in leading by his example to serve the vulnerable, “ Bergh said.

Pope Francis has what Cardinal Rodriguez called a recipe for restoring the church. The first ingredient is mercy. The second is joy as expressed in his exhortation, Evangelii Gaudium, which the cardinal urges all to read. (“We have a problem in that we do not read. We prefer to watch.”)

Also, an important ingredient is the poor, Cardinal Rodriguez said. “If the pope told the European Union they cannot be indifferent to the needs of the poor, lest the Mediterranean become a tomb (after several thousand Africans escaping persecution sank near an Italian island,) can you imagine what he will say to the U.S. Congress when he speaks to them in September?”

“We cannot live in a culture of indifference. We cannot discard people,” he said.

The cardinal’s time in the archdiocese also featured a visit to Seton High School in Price Hill. Seton students and faculty members have made two trips to Tegucigalpa in recent years where they have participated in the feast of Our Lady of Suyapa, patroness of Honduras, and interacted with the youth there. Cardinal Rodriguez told the students he was “encouraged by their visit,” saying it is “beautiful for the young everywhere in the world to be united in their faith.”

Cardinal Rodriguez told the young women about the need for a spiritual GPS in their lives that includes three coordinates: the word of God, the Eucharist and devotion to the Blessed Mother. “With this, you will be bearers of the torch of faith,” he said. “You will take it to other young people”.

He also answered the students’ questions, ranging from how he experienced his call to the priesthood to his relationship with Pope Francis. The cardinal recalled that as a young boy he had a strong interest in aviation, along with feeling drawn to serving the poor. “I felt called to go the go to the clouds in a plane, but also to go heaven with the Lord. I chose the Lord,” the cardinal said.

During his meetings with Pope Francis, which occur every two months, Cardinal Rodriguez said the Holy Father always asks him to extend his greetings and blessings upon the people, especially the youth. “I am happy to collaborate with Pope Francis,” he said. “He is a wonderful, normal person. We can chat and even joke.”

After his presentation, the Seton community presented the cardinal with a T-shirt and pin. They were thrilled when Cardinal Rodriguez, who is a accomplished pianist, granted their request to play and treated them to a rousing Bossa Nova.

Christians either follow God or they're corrupt hypocrites, pope says

Advisor to pope to speak at Athenaeum in March 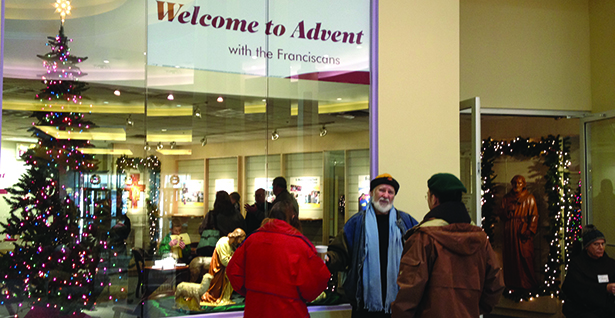