Denver Newsroom, Aug 24, 2020 / 07:19 pm MT (CNA).- Two weeks after a major storm system caused massive damage in the Midwest, residents of Iowa and other affected states are working to rebuild.

For fourteen hours over an 800-mile stretch, the Aug. 10 storm caused major damage and killed several people, with Iowa and northern Illinois the worst hit. The storm began in eastern Nebraska, and also hit Wisconsin and Indiana.

Its winds gusted to the strength of a strong tornado or weak hurricane, reaching speeds of over 100 miles per hour. The phenomenon, known as a derecho, is a chain of intense thunderstorms.

Kent Ferris, Director of Social Action and Catholic Charities at the Diocese of Davenport, told CNA Aug. 24 that “Though people in our diocese have endured days without power, (and) dealt with wind damage to crops and trees, they also have responded generously to people in need in the diocese with food, water and monetary donations,” Ferris said.

“Our terrain may have been battered by Derecho’s winds, but the Holy Spirit blows stronger to prompt heartfelt concern for all our neighbors,” he told CNA.

The storm left hundreds of thousands without power or access to phone and internet. Homes and cars were damaged by high winds, falling trees, and flying debris,

In Iowa, nearly 8,300 homes were heavily damaged or destroyed.

While damage is still being assessed, Catholic Charities of the Archdiocese of Dubuque has set up a relief fund for those affected, giving priority to those not eligible for state and federal aid.

The Catholic Charities affiliate said on its website, “we do know that the individuals and families most severely affected are the poor, and those struggling with the financial impact of the coronavirus pandemic. And we know that the recovery process will be lengthy and costly.”

Some church buildings also were damaged.

In the eastern Iowa city of Grand Mound, the storm tore a hole in the roof of Ss. Philip and James Parish, allowing water to enter and soak the roof insulation and the floor. The wood in the ceiling is saturated, Peter Whitman, building committee chair at the parish, told the Diocese of Davenport’s newspaper The Catholic Messenger.

Ordination of Priest 2017 Archdiocese of Cincinnati 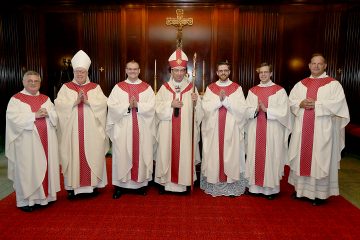