Beijing, China, Feb 17, 2020 / 05:50 pm (CNA).- While the coronavirus outbreak continues, Catholics have sought to provide aid and pastoral care to those threatened by its spread.

In mainland China, the death toll of coronavirus has reached 1,771, and more than 70,600 have been infected in the country.

“Given the continuing severity of the epidemic, the provision of medical supplies such as protective clothing and masks to designated hospitals remains a top priority,” the charity said, according to a Feb. 12 statement.

“At present, the entire society, including the Chinese Catholic Church, is fighting the epidemic to save people,” the statement further read.

Father John Baptist Zhang, head of Jinde Charities, said there is more work to be done and urged the universal Church to provide more aid.

“We need brothers and sisters from the universal Church to join us in the fight against the plague of the human race by making use of the universal strength of the Catholic Church and by donating funds or medical supplies,” he said, according to UCA News.

Originating in Wuhan in China’s Hubei province, the new strain of coronavirus can cause fever, cough, and difficulty breathing. In some cases, it can lead to pneumonia, kidney failure, and severe acute respiratory syndrome.

Most of the reported cases of COVID-19, a respiratory disease caused by coronavirus, are in China, but it has spread to 26 countries, with about 600 cases outside China. There have been four deaths outside mainland China, in Hong Kong, France, the Philippines, and Japan.

Numerous governments have imposed heavy travel restrictions in response to the outbreak. More than 780 million people in China are facing some form of travel restraints.

Several countries have also refused entry to tourists who have been in China.

The Westerdam cruiser stayed at sea for almost two additional weeks after visiting Hong Kong, a city with about 50 cases of coronavirus.

They could finally disembarked in Cambodia on Friday after the ship had been denied entrance in Taiwan, Guam, Thailand, and the Philippines. No one on board the ship was reported to have contracted the virus.

Among the 1,455 passengers and 802 crew, a priest of the Apostolate of the Sea of the United States of America was also stuck on board. The priest, who has asked to remain anonymous, provided both spiritual and counseling services to the passengers.

Doreen M. Badeaux, secretary-general of the Apostolate of the Sea of the United States of America, told ACI Prensa that the passengers were very frightened so the priest decided to “write a novena for the Coronavirus and those who attended Mass daily on board began to pray it every day.”

Besides saying daily Mass and hearing confessions, the priest also offered counseling services and pastoral care to any passenger regardless of their faith.

“During a time of such tension, it is very important to have a priest on board. The crew on board always has to be professional and not show their own stress or concern for passengers. But with the priest, the staff can relax and speak frankly, knowing that he will not share what they say,” Badeaux said.

“I think it reminded people to relax, pray and think about the people around them, realize that everyone was literally ‘in the same boat’, and be patient with the process,” he further added.

Almsgiving: An overshadowed Lenten pillar has something to say

Why is the internet abuzz with false claims of a ‘Vatican blackout’?: A CNA Explainer 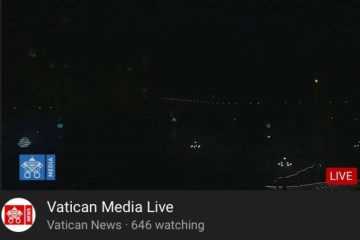