“The culture of care … calls for a common, supportive and inclusive commitment to protecting and promoting the dignity and good of all, a willingness to show care and compassion, to work for reconciliation and healing, and to advance mutual respect and acceptance. As such, it represents a privileged path to peace,” Pope Francis wrote in the peace message published Dec. 17.

“May we never yield to the temptation to disregard others, especially those in greatest need, and to look the other way; instead, may we strive daily, in concrete and practical ways, to form a community composed of brothers and sisters who accept and care for one another.”

Pope Francis wrote that he envisioned this culture of care as a way to combat the “culture of indifference, waste, and confrontation so prevalent in our time.”

He pointed to the spiritual and corporal works of mercy and charity practiced by the early Church as an example.

“The first generation of Christians shared what they had, so that no one among them would be in need. They strove to make their community a welcoming home, concerned for every human need and ready to care for those most in need. It became customary to make voluntary offerings in order to feed the poor, bury the dead and care for orphans, the elderly and victims of disasters like shipwrecks,” he said.

The pope also said that the principles of the Church’s social doctrine served as the basis for a culture of care. He encouraged world leaders to use these principles as a “compass” to lead the way to “a more humane future in the process of globalization.”

He highlighted the principles of care for the dignity and rights of each person, care for the common good, care through solidarity, and care and protection of creation.

“This will enable us to esteem the value and dignity of every person, to act together in solidarity for the common good, and to bring relief to those suffering from poverty, disease, slavery, armed conflicts, and discrimination. I ask everyone to take this compass in hand and to become a prophetic witness of the culture of care, working to overcome the many existing social inequalities,” he said.

The World Day of Peace — instituted by St. Paul VI in 1968 — is celebrated each year on Jan. 1. The pope provides a message for the occasion, which is sent to foreign ministers around the world.

The pope’s message for the 2021 World Day of Peace is entitled, “A Culture of Care as a Path to Peace.” The pope published the message on his 84th birthday.

In his message, Pope Francis quoted a speech by Pope Paul VI given in 1969 to the Ugandan Parliament: “Have no fear of the Church; she honors you, she educates honest and loyal citizens for you, she does not foment rivalries and divisions, she seeks to promote healthy liberty, social justice, and peace. If she has any preference at all, it is for the poor, for the education of little ones and of the people, for the care of the suffering and abandoned.”

Pope Francis also pointed out the “educating people to care begins in the family, the natural and fundamental nucleus of society, in which we learn how to live and relate to others in a spirit of mutual respect.”

“Yet families need to be empowered to carry out this vital and indispensable task,” he said.

At a press conference presenting the peace message, Cardinal Peter Turkson, prefect of the Dicastery for Promoting Integral Human Development, underlined that Pope Francis decided to focus on a “culture of care” in this year’s peace message because of the coronavirus pandemic, which aggravated deeply interrelated crises involving food, climate, the economy, and migration.

Pope Francis began his message for the World Day of Peace by saying that he had been thinking especially for all those who lost family members or loved ones, and all who lost their jobs in 2020.

He also paid tribute to all the physicians, nurses, pharmacists, researchers, volunteers, chaplains, and hospital personnel who “have made and are continuing to make, great sacrifices to be present to the sick, to alleviate their sufferings and to save their lives.”

“Indeed, many of them have died in the process. In paying tribute to them, I renew my appeal to political leaders and the private sector to spare no effort to ensure access to COVID-19 vaccines and to the essential technologies needed to care for the sick, the poor and those who are most vulnerable,” he said.

Pope Francis also expressed disappointment that “alongside all these testimonies of love and solidarity, we have also seen a surge in various forms of nationalism, racism and xenophobia, and wars and conflicts that bring only death and destruction in their wake.”

The pope stressed that there is a need for relationships between nations to be inspired by fraternity, mutual respect, solidarity, and the observance of international law. He also urged that humanitarian law be respected.

“Tragically, many regions and communities can no longer remember a time when they dwelt in security and peace. Numerous cities have become epicenters of insecurity: citizens struggle to maintain their normal routine in the face of indiscriminate attacks by explosives, artillery and small arms. Children are unable to study,” he said.

“Men and women cannot work to support their families. Famine is spreading in places where it was previously unknown. People are being forced to take flight, leaving behind not only their homes but also their family history and their cultural roots.”

“While such conflicts have many causes, the result is always the same: destruction and humanitarian crises. We need to stop and ask ourselves what has led our world to see conflict as something normal, and how our hearts can be converted and our ways of thinking changed, in order to work for true peace in solidarity and fraternity.”

Shine On: The Giver of Gifts 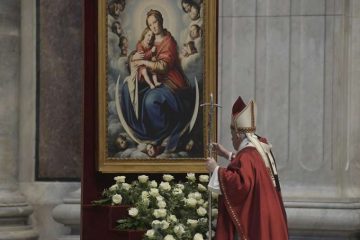