In October, 37 members of the Latino community were recognized at St. Julie Billiart Parish in Hamilton for completing a program called Echoes of Faith.

The program is a new initiative launched in large part by Dina Beach, of the Archdiocese of Cincinnati’s Office of Evangelization and Discipleship, who is charged with certification in catechesis for the Latino community.

Another 48 Latinos are completing another program called Walking with Christ, a more advanced curriculum.

Echoes in Faith is a basic faith formation program for Latinos in need of education about the faith, while Walking with Christ targets people with sufficient faith formation to delve deeper in their faith.

Echoes of Faith is for those students who have no formation at all in religion,” said Beach, who spent 15 years as coordinator of Hispanic Ministries for the archdiocese prior to being asked to take the reins of certification and catechesis for the Latino community. Walking with Christ is the program in certification for our Office for Catechesis. Echoes of Faith is for those who have a desire to learn more about their religion. Once they take that, they can move into the Walk with Christ program, the advanced program.”

Beach said the objective “is for our people to be involved because we do not have many catechists teaching the faith. That’s not just a Hispanic/Latino issue. Now, the archdiocese has opened the doors for multicultural formation,” Beach said. “We started with the Hispanic community because, since 2001, I have been working with that community in trying to do something. Now I am so happy the archbishop supports this program of formation and (in the future) I will be working to open the doors for other groups such as Koreans, Vietnamese, and Filipino communities. Today is a beginning and I think the Archbishop is happy with how the students are really responding to the call. Jesus is calling them and they are responding. ”

A native of Mexico City, Beach came to Cincinnati as a lay Comboni missionary. “I received my formation in Mexico as a missionary and I was sent here as a missionary. I came here in 2001 to the Hamilton area, and specifically to St. Julie Billiard Parish, where I helped coordinate the Hispanic ministry there. I provided for religious formation there for the people of Hispanic descent.

Isn’t it incredible that I came to the United States as a missionary?”

The trip from Mexico to the United States was dicey.

“The Mexican government did not recognize any interest in religion. Though I wasn’t chased from Mexico, as you know, the immigration laws pay a lot of attention to Mexico because the of holes in the walls … People coming from Mexico, a lot of them, have learned about Mexicans from other countries. If you read the news, there are many people who come into Mexico from different countries in Asia, from India. A lot of people are using Mexico as a way to enter the United States.”

Beach holds a master’s degree in biology, specializing in ecology, from the University of Miami in Florida. “I was studying and learning about the insect community and then I decided to be a missionary. Now, I’m working with human communities and imparting knowledge with these communities. She resides in Hamilton with her husband, Dan, and two step-daughters. They remain members on St. Julie Billiart.

Many of the Walking with Christ participants took the program online.

There are eight parishes with a strong Latino presence in the archdiocese: five in the Cincinnati area, one in Hamilton, one in Dayton and one in Springfield .
“It has taken two years to develop this program,” Beach said. “I made a long search to determine which program would be the best knowing my community has different levels of education. I decided to choose the program with my coworkers.”

Every Day Evangelist: Painting is a passion for artist 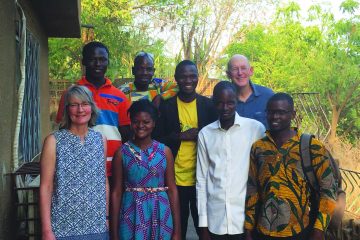