Honoring those who served

ARCHDIOCESE — Veterans’ Day, celebrated Nov. 11, gave students at area Catholic schools the opportunity to express their gratitude to those who have bravely served our country.

At Roger Bacon High School, members of Jim Swedenburg’s senior government class shared breakfast with some 120 veterans on Nov. 10, marking the ninth year for the event. Most of the veterans were from the World War II era. While sharing a meal with the students, the veterans shared their experiences of service to their country. Some also brought memorabilia of their time in the armed forces.

This year the Veteran’s Administration brought a mobile unit to campus to give veterans the opportunity to learn if they are receiving the benefits for which their service makes them eligible. Each veteran received a bag containing items provided by local businesses to show their appreciation for services rendered.

St. Columban junior high students, each holding a flag, made the 15th annual pilgrimage from their school to Veterans’ Loveland Memorial to honor all military members who have served the United States, especially those from the Loveland community. Just two weeks prior, Loveland residents had gathered to remember their own fallen hero, Marine Capt. David “Seth” Mitchell, killed in Afghanistan on Oct. 26.

As Evan Reid played “Taps,” student council officers placed flowers near the flags of each military service group and a wreath at the U.S. flag. Everyone then joined in the Pledge of Allegiance.

Honoring those who served 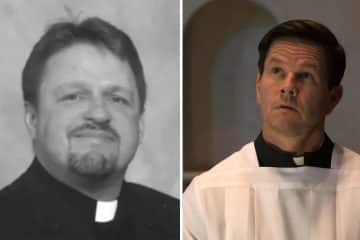