When she receives her diploma at Mother of Mercy High School’s graduation ceremony on June 1, Nancy Nzobigeza’s heart will be filled with the gratitude for the education she has received and determination to help other young woman have the same opportunity she’s had.

Nzobigeza and her family (father, Jeff, mother, Lena, and older sister, Winnifrida) overcame a great deal to find peace and security in the United States. They escaped their war torn East African homeland of Burundi to settle in Tanzania, where refugees have been viewed with fear and suspicion. The family was forced to change its name and the girls had to pretend to be Tanzanian in order to attend school. “We had to live like different people,” Nzobigeza recalled. 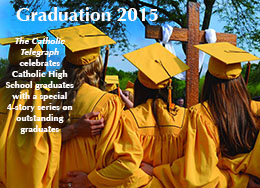 Her father came to Cincinnati in 2001 and eventually went to work for Catholic Charities. For years, he struggled to bring his wife and daughters to the United States, his efforts stymied by Tanzanian immigration officials. Lena Nzobigeza came to Cincinnati in 2010, joined by her younger daughter a year later, after Mercy agreed to sponsor the academically gifted young woman’s student visa. The whole family was reunited last year when older daughter Winnifrida was finally able to leave Tanzania. She is now a student at Xavier University.

“From my first day here, I felt welcomed,” she said. “Everyone was great. In Tanzania, I couldn’t tell people about my background or share who I am. Here I’ve been able to express myself and people have accepted me for who I am. It’s a very good feeling.”

During her sophomore year, Nzobigeza began volunteering as an English tutor at St. Leo Parish in North Fairmount, a haven for a diverse population of refugees, immigrants and native Cincinnatians. She helps refugee children with their schoolwork and helps the adults prepare for their citizenship exams. It’s a cause that’s “dear to my heart,” Nzobigeza said. “I share my gifts and try to make their lives better. I tell the children to take advantage of whatever chance they have to study, to continue their education.”

Thanks to her experience at Mercy, where she has been involved in a variety of activities, including the French Club and helping with school open houses, Nzobigeza has come to greatly value the importance education. “I feel like if you have an education, you can accomplish anything. My education has made me everything I am,” she said.

Nzobigeza plans to attend the University of Cincinnati, where she’ll study biological science. She hopes to one day become a doctor. “That goes back to when I was a little kid,” she explained. “I had surgery and a hospital stay and actually loved the hospital environment. I want to travel and save lives and give back for the good care I received.”

Although not sure when, Nzobigeza would like to eventually return to her homeland. “I want to work for change and help others have the opportunities I’ve had. I hope to be an inspiration for other young women.”