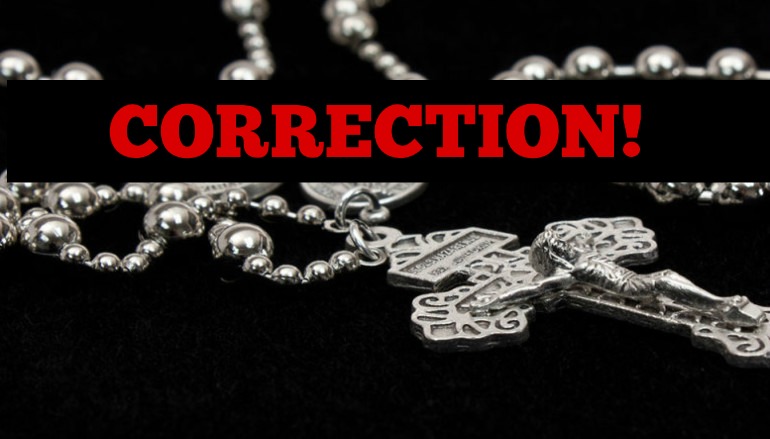 On October 8, a ring of roses will circle a statue of the Virgin Mary at Immaculate Conception Church at the University of Dayton.

The 13th annual Family Rosary Rally is switching venues this year after 12 years at the University of Dayton Arena, but the event sponsored by the Dayton Chapter of the Knights of Columbus — representing 25 K of C councils — is expected to draw more than 800 participants.

“The mission is to reinforce our devotion to Mary,” Coordinator Don Coty said. “Since this is the 100th anniversary of Fatima, that will be the emphasis this year. Again, we will have the Living Rosary where we have 65 participants. Each one represents a bead of the rosary. They start the prayer and the audience finishes each prayer. Each of those persons will have a rose they will take to the statue of Mary, to create a big ring of roses around it. People will say the Rosary in different languages as a part of it.”

The rally begins with a prelude at about 2 p.m. and concludes at about 4. Father Ethan Moore, associate pastor at St. Peter Parish in Huber Heights, who recently returned from a trip to Fatima, will be the keynote speaker. The event does not include Mass.

“This is an attempt to unite Dayton —all the parishes — to pray together honoring Our Lady, asking for her intercession, her bringing us to her son,” Father Moore said. “It is kind of neat in that after Mary died she brings her children together like any mother. She wants all of us to be a happy family — be in the same room and enjoy one another’s company. And she brings us into the company of her son, Jesus, in a real way, because we expose the Eucharist. During this Eucharistic adoration, we pray the International Rosary which is par for the course when it comes to Fatima. We speak it in all of the languages of the people who are present there.”

Father Moore visited Fatima in June with a group of 33 high school and college students from the Dayton area. “Basically it is people going on pilgrimage together to encounter the Blessed Mother and her messages where they happened. And, yes these lives were changed. It was incredible just participating in everything that’s there from the Rosary processions to the penitential act of praying while processing on your knees…on cement. There are so many other things, such as seeing where the children [to whom Mary appeared] are buried —Jacinta, Francisco and Lucia.

“One component of Fatima is that there was the Miracle of the Sun — a very expressive outpouring of God’s presence in a tangible way, and I think that Mary did that,” Father Moore said. “She brings Christ to the world in the flesh and now we are still benefiting from that experience of her gift of self to God.”

Father Moore said his talk will focus on Mary “and Fatima will be a key part of that.”