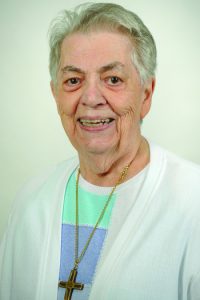 Sister Anne Cecilia took to Ancestry.com like a duck to water. Small wonder! Her life was well grounded in a wide network of well cultivated roots.

Take, for example, her affection for the town of her birth, Washington, DC. She delighted in calling it by its playful nickname, Swampoodle, and was proud to be a card-carrying member of the city’s Oldest Living Inhabitants Association. In her file we found a detailed chronological list of the dozen or so places she had lived growing up–Northeast, Northwest, Southeast, Hyattsville. No wonder she was such a fantastic navigator for drivers new to DC; in her head she carried a veritable “map” of her after-school stomping and biking grounds. Her list of addresses suggests something much deeper, though. Its annotations describe a rich succession of various  extended-family configurations that were part of her growing up during the Great Depression. Her parents nimbly adjusted to changing circumstances, joining forces with a succession of relatives:  “Mom’s mother”; “Dad’s sister”; “my paternal grandparents”; “Aunt Bobbie”; “Aunt Rita.” Early on, Anne learned that true family in all its breadth and depth requires a lot of give and take.

It’s no surprise that her M.A. from Villanova University (PA) was earned with a major in American history.  She knew the  Constitution of these United States  from A to Z — and was incensed whenever she felt it was being  ignored or misinterpreted! One of her favorite pastimes was reading historical  biographies on her well-worn Kindle. Her  accounts of Washington, Jefferson, Adams, FDR and the like made for stimulating conversation at meals. She was especially adept at tracing similarities and differences between current situations  and those of centuries past.

Anne treasured her Notre Dame roots as well. It was a source of pride for her that she and our co-foundress Françoise Blin de Bourdon, shared the same birthday – March 8th. She had been baptized, moreover, in St. Aloysius Parish, site of the first SND foundation in Washington (1873). It was there, too, that her mother and her Aunt Rita had both gone to grade school, enjoying “the benefits of a marvelous Notre Dame education.”  Anne traced her vocation to her first direct encounters with SNDs at St. Martin’s School, which had “a most significant effect” on her life, she wrote. “I was inspired and awed by them and felt early on that I very much wanted to join their ranks. This feeling continued when I entered Notre Dame Academy [K Street].”  Over time, the Sisters’ fine teaching and example deepened her desire to become one of them. “When I told my parents of my wish to enter the convent, they didn’t outwardly object; however, my father thought my mother could talk me out of it. Obviously, that didn’t work.”  On August 13, 1944, she began her postulancy at Ilchester.

At the deepest level, Anne’s  life in Notre Dame was inspired by the charism of St. Julie Billiart and the example of our co-foundress, Françoise Blin. She forever treasured memories of her 2001 pilgrimage to “Julie country” in Belgium and France. She was an avid reader of St. Julie’s letters, often in tandem with related sections of Françoise’s  Memoirs. Her practical living out of our charism was  energized by the unmistakable resonance she found  between our congregation’s focus on education and her own natural attraction to teaching youngsters “what they need to know for life,” as St. Julie had advocated.

Her 27 years in the classroom included stints in  DC, Maryland, New York, and Pennsylvania—first in grades 4 through 6, and then at junior-high level. She was a genius at teaching basic life skills (how to distinguish fact from spin when reading a newspaper, how to plan and complete a science project). But she also recognized the importance of allowing room for creativity and fun. Who can forget her enthusiastic accounts of the plays her students had written and produced, the school newspapers and literary magazines they had turned out, and the pranks they had pulled off? She took special pride in the way her eighth graders had produced Cheaper by the Dozen, sold tickets to the play, and then used the proceeds to fund their very own literary magazine! Michael Parker, a former student who went on to earn his Ph.D. from Yale, teach English at the Naval Academy for nearly four decades, and publish through Oxford University Press, wrote her as follows in 1995:  “It was only when I myself began to teach that I truly appreciated the effort you put into teaching me and my classmates at St. Camillus. I learned more  about writing and about language from you than in most of my subsequent education.” He especially appreciated her encouragement and challenge, that gave him “the freedom to be creative and test my limits.” He was still using techniques he had first learned from her: “The strategies you used to spur us to discussion have proven invaluable with the midshipmen. In sum, your legacy as a teacher lives on—you’ve had an effect on students that you’ve never known.

But there is a time for everything. “After 27 years in the classroom,” Anne wrote, “I turned in my keys and my signal to take up the daunting task of being the Director of Financial Aid at Trinity  College.”  The move came as Trinity was actively recruiting women of all ages in the Washington metropolitan area, including many unable to afford a Trinity education—young adults in low-paying jobs,  single mothers just making it from one paycheck to the next. Anne found herself helping needy students develop practical, down-to-earth financial-management skills. “The various loan programs demanded a lot of oversight,” she wrote, “to be sure the borrowers understood their obligations regarding the repayment of these loans and that they followed through . . . .”  For Anne, administering the various federal programs and Trinity’s own limited scholarship resources was always demanding, sometimes frustrating, and often tedious. But for the students she counseled, her services unlocked doors of opportunity that would otherwise have been non-negotiable. She was, in the words of our SND Constitutions, standing with people struggling to secure “adequate means for human life and dignity.” (#17)

When her mother’s health began to fail, Anne went to care for her in her home in Florida. Those four years brought special blessings to both of them. Anne especially appreciated the understanding and support of some Coesfeld Sisters of Notre Dame living nearby during her mother’s final illness. Following her mother’s death, Anne returned to Trinity, expecting to retire there. But God had other plans. “The call of the classroom once again sounded in my ears.” She happily joined  other “retired” SNDs at the Notre Dame Education Center, tutoring adults without a high-school diploma as they prepared for GED exams. She relished the opportunity. “This is a work that must be especially dear to St. Julie,” she wrote, “because we are truly working with people who have been passed over in many ways by our society. The work is challenging but rewarding for all of us involved.”

As she had done all her life, Anne also contributed to local SND community needs, submitting Sisters’ work requests to Trinity’s Physical Plant Office, taking her turn reading at Mass (ex cathedra!), and especially, keeping everyone in touch with urgent needs across the city, the country and the globe.   Her petitions during each day’s General Intercessions came from a heart as wide as the world. When she moved to Villa Julie in 2016, the litany continued. She was also a “regular” whenever volunteers were needed to cover the  Reception Desk. She took special joy from her nephew Michael’s visits and flowers, and from corresponding with family, friends, former colleagues and one-time students by phone, e-mail, notes and cards. To the very end, she nurtured that far-reaching extended-family tree so deeply rooted in her heart and prayer.

“I am grateful,” she wrote last year at the time of her 75th jubilee, “for all the kindnesses shown to me by so many people over the past 75 years, and I pray that God will reward them abundantly. This is part of the ‘hundred-fold’ that the Lord promised to those who have given up everything to follow him. I have been truly blessed.”

As have we, for having shared Notre Dame life with this remarkable daughter of Frederick and Ella Coxen and of St. Julie Billiart as well!