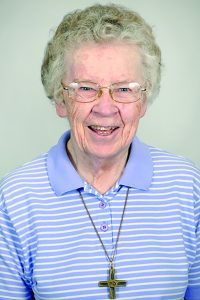 Sixty years later, she would write: “My vocation was seeded and nurtured in ordinary and mysterious ways” — “first by my parents and brothers and sisters and then by God through my Notre Dame family . . . .” At Notre Dame Moylan during her high-school years, God had surrounded her with “teachers who were kind, teachers who really listened when you talked to them, teachers who were fun to be with.” She set out to join their company!

Looking back as a Diamond Jubilarian at the road she had come, Catherine identified three distinct stages in her apostolate: 25 years of teaching (first grade became her first love!); 11 years as principal at St. Mary’s Interparochial School in Philadelphia; and 21 years as Pastoral Associate at Old St. Joseph’s Church, also in Philadelphia. She firmly believed that the hand of God had guided her – “inch by inch.”

STAGE ONE:
Her teaching years were shaped by the formal missions she received from “headquarters” – all of which she embraced in a spirit of obedient faith. God blessed her with “a very good start” at St. Joachim and Anne in Queens Village, NY, where she spent her first eight years: “a very happy, happy, happy place,” with lots of students (as many as 200 First Communicants, including children from CCD classes!), “good principals,” “excellent teachers and good people.”

Following a brief but happy one-year stint at St. Bernadette’s (Philadelphia}, she was missioned to West Rittenhouse Square, a multipurpose facility housing 48 SNDs along with “the little school, the boys’ school, girls’ school, the High School and the Academy, the Ladies’ Sodality [and] the Children of Mary.” At first, it felt like “a little world unto itself”; “Everything – even Holy Week services and Confirmations and First Communions” took place right there. Catherine “missed the parish and . . . missed going out and meeting parents.”

On the other hand, living in a community of 48 Sisters, many of whom fanned out each morning to teach various subjects in various diocesan schools, was enriching: “We weren’t a school talking about my school. Everybody just jelled. And I felt blessed with that.” Recalling the Square’s Centennial, she remarked: “There’s an old saying “We stand on the shoulders of the giants that went before us. A hundred years of giants have left their mark on Philadelphia.”

Unfortunately, a hundred years of use and increasingly expensive upkeep had also taken a heavy toll on the Square’s facilities and budgets. Its superb academic reputation not withstanding, the Square’s days were numbered. When phase-out began with grades 1-4, Catherine was missioned back to parochial schools – first, in Maryland (St. Joseph, Beltsville; St. Jerome’s, Hyattsville); then, in New York (St. Catherine of Genoa; Sts. Joachim and Anne); and finally, from 1970-72, at St. Philip Neri (Glenburnie, MD).

During her quarter century of teaching, Catherine had collaborated with parents of all sorts, with good effect. It’s not surprising that working with adult Catholics became a growing interest, especially in the wake of Vatican II. While at St. Jerome’s, she had happily availed herself of tuition-free courses on key Council Documents at The Catholic University of America. During the same period, she had taught public-school children from disadvantaged backgrounds two nights a week for Operation Upward Bound. Horizons were widening – fast! God was sowing new seeds and preparing her – “inch by inch” – for Stages Two and Three of an increasingly diversified apostolate.

STAGE TWO:
When the Maryland Province notified St. Philip Neri in 1972 of its intention to withdraw Sisters the following year, Catherine wrote that she was “ready and willing to be sent.” And sent she was – back to Philadelphia, as Principal of St. Mary’s Inter-Parochial School. It had been established in 1969 by the Archdiocese of Philadelphia to serve children from seven different parishes without schools of their own. Catherine seems to have reveled in the challenge of building bridges among children from so many different family, ethnic, racial and socio-economic backgrounds:

. . . The idea was a good one. I think it was very good. You had the rather wealthy children from Society Hill; you had the very, very poor children . . . , Black, Latino, poor Irish from the Schuylkill; you had the center-city people, high rises all around them. You had every mixture that was in society at the time, and there it was – a microcosm of the world. And they ate together and played and learned and sang and they lived. They came out of their neighborhoods for those six or seven hours a day and they were just fine.

Finances, on the other hand, were at first far from fine, given the seven pastors’ reluctance to fund a school that was not theirs. “Each parish was assessed a subsidy, percentagewise, depending on how many children they had. Now the poor parish had the most children but . . . the least money. The children didn’t have it, the pastor didn’t have it.” Fortunately, St. Mary’s high percentage of disadvantaged children entitled it to Title I funding, which, along with Sisters’ contributed services, kept the ship afloat.

Eventually money wasn’t a problem any more. Because not only did the seven parishes [with no schools] send children, but the reputation of the school was so good that children began to come from parishes that did have a school of their own . . . . There was one father who . . . had four children. The tuition [in his own parish school] would have been $200.00, [but] he said, “Sister, we’re in an Irish ghetto. I don’t want my children growing up thinking that the Irish are everything. I want them to know that there are Blacks, Puerto-Ricans, and rich and poor … .” So I took them, and [he] paid $400.00 each. . . . More and more people did that.

Midway through her 11th year at St. Mary’s, Catherine began taking stock. “I felt the school needed a change. We were getting into computer education and I felt someone else should start that. It was time for me to move on; besides, I wanted to work with adults.” But where? And how? Providence to the rescue!!

STAGE THREE:
One of the parishes served by St. Mary’s School was Old St. Joseph’s, staffed by Jesuits and a stone’s throw from the school. Catherine “happened” to meet its pastor on the sidewalk one day. As they were talking, another priest “happened” to pass by on his way to Pennsylvania Hospital, where Catholic patients received pastoral support from St. Joseph’s. The pastor “happened” to mention his plan to add a new hospital-chaplaincy position to his staff the following year, to provide a fuller range of services to patients and their families. The conversation ended, and he and Catherine went their separate ways; but the seed germinated in Catherine’s heart!

Thus began Catherine’s 21 years as Pastoral Associate and Hospital Chaplain at Old St. Joseph’s! Chaplaincy duties presented a big learning curve: the hospital was “a whole different world,” and “death and dying were no longer “just something intellectually you know happens.” Seeing them “in flesh and blood” – especially in young people, including AIDS patients, was another matter. One “great big strong, strapping fellow” she recalled, “ burst out crying and shook all over like a child sobbing” as she walked into his room. “I often experience God more in the hospital than I have in Church. The Eucharist is on that bed.” As the only chaplain, Catherine also took on visiting patients of other denominations and faiths who asked to see her.

Besides chaplaincy at the 8-floor, 500-bed hospital serving 125 Catholics on average, Catherine gradually took on additional parish responsibilities – coordinating CCD, planning programs and liturgies with the four Jesuits on staff, training lay volunteers, preparing for baptisms, helping with pre-Cana, contributing to adult education and, with special training, providing spiritual direction. When she decided it was time to retire in 2004, the pastor wrote: “Throughout her years as a religious sister, Sr. Catherine has touched thousands of persons with the hands of Jesus.”

In just a few years, Catherine found herself on the receiving end of the kind of compassionate care she had provided for so many others. She moved first to Villa Julie (2008-13), and then, as her Parkinson’s advanced, to Mount Notre Dame (November 2013). Eventually, she became less and less able to communicate with us. But with God? Surely, “in ordinary and in mysterious ways” — ways beyond our understanding — God was still speaking, nurturing, calling this woman who had “spent a lifetime pursuing vocation. Isaiah’s words come to mind:

No longer will your Teacher* hide himself,

but with your own eyes you shall see your Teacher,

And your ears shall hear a word behind you:

May 31: Feast of the Visitation of the Virgin Mary 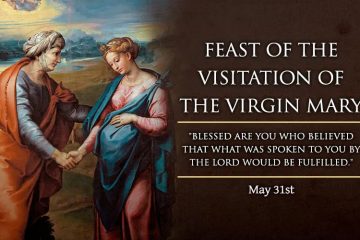