Sister Mary enjoyed teaching. For 21 years, she taught every elementary grade between 2 and 8, and served as principal at schools in IL, OH and AZ. In the Archdiocese of Cincinnati, she served at St. Michael in Sharonville and St. Agnes in Dayton. In northern IL, she served at St. Alexander in Villa Park, St. Robert Bellarmine in Chicago, St. Victor in Calumet City and St. Rita in Rockford.

While studying in Rome, Sister Mary had the privilege of attending the canonization of St. Julie Billiart in 1969. She also learned of the Sisters’ new mission in Kenya and went there to teach at a secondary school for girls in Maragoli for 5 years.

After training in spiritual direction, she became novice director then spiritual and retreat director for 26 years. Sister Mary was known for the 150+ prayer shawls she knitted, her welcoming smile and listening presence.

Memorials on behalf of Sister Mary may be made to the Retirement Fund of the Sisters of Notre Dame, 701 E. Columbia Avenue, Cincinnati OH 45215.

About the Sisters of Notre Dame de Namur

The Sisters of Notre Dame de Namur are an international congregation founded in Amiens, France in 1804. In 2015, we celebrated our 175th year in the U.S., and our role in helping to shape the Catholic education system in the United States. Today, more than 1,300 Sisters of Notre Dame serve across the U.S. and in Belgium, Brazil, Democratic Republic of Congo, France, Great Britain, Haiti, Italy, Japan, Kenya, Nicaragua, Nigeria, Peru, South Africa, South Sudan and Zimbabwe.

Sisters of Notre Dame de Namur change lives by making known God’s goodness. Throughout the world, they are committed to education and take a stand with poor people, especially women and children in the most abandoned places. 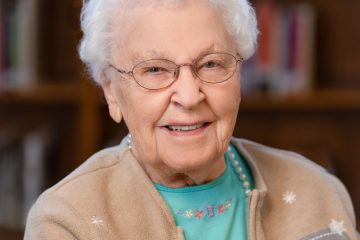