St. Vincent Ferrer Parish in Kenwood was the site of a joyous celebration June 6, as the faith community marked its 75th anniversary. Archbishop Dennis M. Schnurr presided at the anniversary Mass, with Fathers Dennis Jaspers, pastor, and Tom Wray, parochial vicar, as concelebrants.

There was a time when the now-bustling shopping and residential area where the parish is located was a little more than field. With the end of the Second World War and new homes being constructed, the population in Kenwood grew rapidly, and neighboring Catholic churches were unable to accommodate the faithful. The first Mass for the new parish, named for the Dominican preacher, was held at a local school gymnasium on March 17, 1946. The rapidly growing new parish needed its own space, so the Archdiocese of Cincinnati purchased 12 acres of land, and in July 1946, construction of the first building began. Father Norbert Miller was named administrator of the parish, which served approximately 175 families. The original church was a prefabricated surplus hanger from the war and served not only as worship space, but also as the school, convent and rectory. It’s still in use today and houses the school cafeteria, gym and parish offices.

By 1956, St. Vincent Ferrer Parish had grown to 450 families, with school enrollment on the rise. Ground was broken for a new school building on Nov. 9, 1958. That facility, which still serves as the parish school today, was dedicated less than a year later by then Auxiliary Bishop Paul Leibold. The present church building was dedicated on Feb. 2, 1969.

Denny Connor, whose parents, John and Virginia (better known as Bud and Jinny), were among the founding parishioners. With the exception of a couple of years away, Connor has always called St. Vincent Ferrer home.

“It’s always been a very welcoming community,” he said. “People who grew up in the parish still have strong feelings about it and are very attached. This place just builds bonds.”

Father Jaspers recalls the warm greeting he received upon arriving at St. Vincent Ferrer in 1966, his first assignment as a newly ordained priest. “The people were so welcoming, kind and generous, and still are,” he said. “It was a very exciting assignment for a new priest, not long after Vatican II, with the opportunity to be a little more modern and flexible, celebrating Mass with all of the young people, being part of the building of the current church.”

While continuing to serve as pastor at the neighboring All Saints Parish, Father Jaspers returned to St. Vincent Ferrer in 2016. As a pastoral region with All Saints, the faith communities share ministerial efforts and collaborate on both a spiritual and administrative basis. Given his affection for the people at St. Vincent Ferrer, Father Jaspers feels blessed to have returned to the parish, especially as it marks this milestone. “It’s been such a joy to reconnect with people and I’ve enjoyed celebrating with them,” he said. “They love their parish and their school.”

St. Vincent Ferrer School is home to 150 students, under the leadership of Mikki Dunkley, principal. Her own children attended the school, and she describes the experience of being a staff member, parent and parishioner as “truly being part of a family. I can’t count the number of times the community has stepped up to take care of each other. We just love one another through challenging times and lift each other up in prayer. The anniversary is an opportunity to celebrate our vibrant faith community. We’re a hidden treasure in Kenwood.”

In preparation for the 75th anniversary, Dunkley’s husband, Mark, an architect by profession, has taken the lead on recent renovations to the church, funded by parishioners. Updates and improvements include painting the church’s interior, refurbishing kneelers and replacing carpet. Most significant is the addition of a new multi-purpose gathering space, named Jaspers Hall. “It’s really a place where parishioners can gather for fellowship and hold on to that sense of community, which is so important to us,” Dunkley said.

The space is named, of course, for Father Jaspers, “who has really taken the lead on the organizing the anniversary celebration,” Connors said. “That we’ve made it this far really is a tribute to the parishioners and the leadership of our pastors. We’ve had good times and bad times, but their faith and commitment has really seen us through.”

Today, St. Vincent Ferrer is a faith community comprised of more than 600 families, with active ministries and inspiring liturgies.

This article appeared in the July 2021 edition of The Catholic Telegraph Magazine. For your complimentary subscription click here. 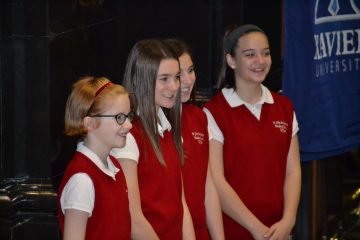