Some of my greatest experiences of peace came when wandering the woods as a child. My backyard was a lovely forest that boasted of nothing extraordinary. The foliage towered above my small frame when I hiked steep hills, grabbing rocks and branches so I could pull myself along. The environment was simple, where I could seize adventure or just sit against a tree to relax. Out there, I talked to myself, dug holes, collected rocks and felt such freedom.

Though I didn’t intend for retreats into the woods to be prayerful experiences, I recognize now that it was one of the very first places I encountered God intimately. At first glance, it’s easy to see that the Author of All Things composed each blade of grass and muddy ditch I stamped on and through, yet more fruitful and evident of His presence was the confidence and freedom I breathed. I felt relieved and calm and at peace.

Many of us are familiar with the concepts of beauty, truth and goodness – the three transcendentals, the common characteristics among creation. You can dive into the philosophy behind each somewhere else, but here, I lay out simply that God is fully each one. He is goodness itself. He is truth, as well as beauty; and it follows that His creation, from the smallest speck of dust to Everest, is a reflection of Himself. The sun rising for another day reminds us that His “mercies are new every morning” (Lam. 3:23); fresh buds reveal that God “makes all things new” (Rev. 21:5); the light of the sun, moon and stars illuminates whatever we do, pointing to the fact that His “word is a lamp unto [our] feet” (Ps. 119:105).

Truly, the whole wide world resounds with echoes of God’s existence. When we step outside for a hike, take in a refreshing lake or get some air on the front porch, we not only encounter the glories of creation, but also the Creator’s goodness in the peace and freedom that follow. Indeed, He is inescapable when we immerse ourselves in what His hands wrought.

THE FATHER REVEALS HIMSELF

My friend Rachael was one of my biggest cheerleaders when I planned a solo trip to Iceland last summer. Having been there herself, she glowed as she told me, “It’s the land of the Father. You’re going to feel so loved.” Rachael’s prediction was exciting, though I was hesitant, even skeptical, to believe that I would have a major encounter with the Lord.

Driving along the Icelandic south coast, I spotted an enormous waterfall by the side of the road. I parked and walked away from it, waiting out a new swarm of tourists. A few hundred grassy yards from the main attraction, I happened upon a cave, and hopping from rock to rock through the narrow entrance, I saw the cave open to reveal another waterfall. Though much smaller than the sight that compelled me to pull over, this one was such an enchanting find that all I could do was stand there grinning, in awe at the surprise. With an overflow of delight, I knew I encountered the Father.

When I returned home, I took our kids to visit a state park with a small waterfall. I didn’t tell them what we would find, so when we turned the corner on a beaten path in the woods and discovered a creek cascading over a drop, they were absolutely giddy. They played in the waterfall, ducking behind it to watch it splash, and after wearing themselves out, everyone sat quietly on the dirt to just look.

The Father reveals so much of Himself to us constantly through His wild creation. His constancy, His eagerness to surprise us and His renewal all point to God’s truly great love for us. Open your eyes to the wonders right in front of you and realize how close the Lord is.

Katie Sciba is a national speaker and Catholic Press Award- winning columnist. Katie has been married for 14 years and is blessed with six children. 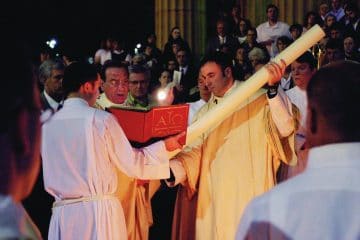