For today’s Throwback Thursday, the staff shares editorial cartoons from three different decades of The Catholic Telegraph-Register highlighting issues important to the church that now, decades later, are still very much front and center. These cartoons show that the more things change in the culture around us, the more the teachings of the church remain constant and true. 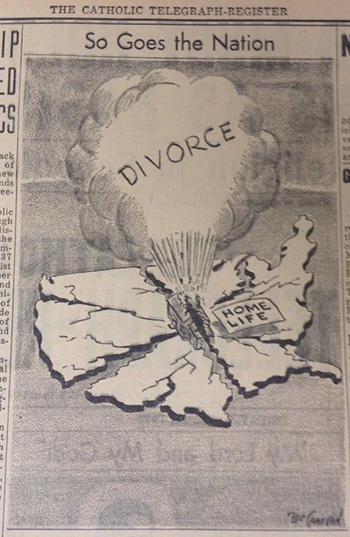 Today, the Catholic church remains a stalwart supporter of marriage and its indissolubility. The United States Conference of Catholic Bishops’ 2009 document Marriage: Love and Life in the Divine Plan, write, “Marriage is meant to be a lifelong covenantal union, which divorce claims to break. Troubled couples as well as divorced persons are encouraged to rely on God’s help and to use the resources of the Church for support and healing.”

When the associated cartoon was published, national divorce rates were less than 30 percent. In 2011, the number was 53 percent. Divorce remains a painful part of American culture though the Catholic church continues to be one of marriage’s strongest advocates. 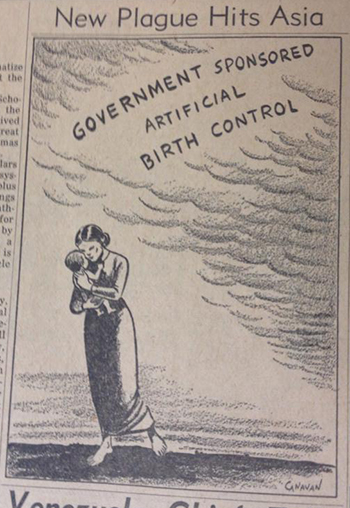 The second cartoon in today’s Throwback Thursday is from the late 1950s. It depicts a woman carrying an infant child away from an oncoming cloud of “government sponsored artificial birth control.” The caption reads, “New plague hits Asia.”

The cartoon doesn’t specify what nation it was targeting, but around the time of its publication Japan was experiencing a surge in artificial use of family planning, not the least of which came via abortion. Also in the 1950s India and other nations began a national “family planning” program related to concerns about population growth.

Regardless of the cartoon’s target, government support of artificial birth control continues to be a worldwide issue. In the United States the Catholic church, through the USCCB, has vehemently opposed government plans to expand access to artificial contraception through the HHS Mandate.

Plight of the Migrant Worker

The final cartoon comes from the 1960s. In this one, a migrant worker is seen seeking a ride along the side of a road as a van labeled, 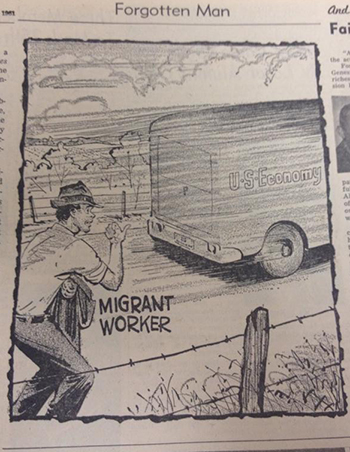 U.S. Economy speeds by, leaving him behind. The caption for the cartoon titles it, “Forgotten Man.”

Immigration continues to be a central issue in American politics with the Church advocating for the dignity of of immigrants and for their proper treatments. On their website’s immigration section, the USCCB writes, “The Catholic Church in the United States is an immigrant Church with a long history of embracing diverse newcomers and providing assistance and pastoral care to immigrants, migrants, refugees, and people on the move.  Our Church has responded to Christ’s call for us to “welcome the stranger among us,” for in this encounter with the immigrant, the migrant, and the refugee in our midst, we encounter Christ.”

Immigrants to the United States continue to face many challenges and hardships, but the church stands as an advocate for their human rights to make sure they are not forgotten.

Pope says respect for religion should limit freedom of expression 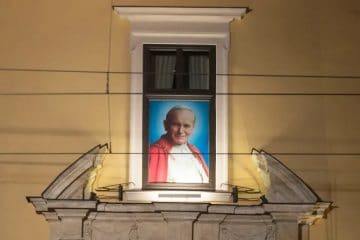