The Cathedral of St. Peter in Chains is an “historic, majestic, architectural masterpiece of a worship space,” according Father Barry Windholtz, pastor.

While it is the home of the cathedra, the archbishop’s chair, it needs the one thing every other church in the Archdiocese of Cincinnati has  — a parish. 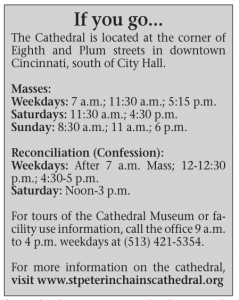 “It’s a beautiful, awe-inspiring worship space, but there’s no one in it on Sunday,” said Father Windholtz. He has been pastor of the cathedral for two years and remains pastor at St. Rose Parish in the East End, and says he has 200 parishioners at the cathedral, “but I want to build a community and I want them to make this their home.

“It’s not just a place for special occasions,” he said, openly disappointed that there are not more baptisms and funerals held in the church with the spectacular Venetian glass mosaic of St. Peter receiving the “power of the keys,” which was created in Europe, and with St. Peter shown in prison.

The church fell from favor as a cathedral as it deteriorated with the neighborhood in the 1930s during the time of Archbishop John T. McNicholas. In 1938, the archbishop’s chair was moved to another church. With the urban renewal wave of the 1950s came new life for St. Peter in Chains. Archbishop Karl J. Alter renovated and expanded the footprint of the building. When it was rededicated in 1957 and resumed status as a cathedral, it became the vanguard of the ongoing downtown revitalization effort.

“Archbishop Alter was a man ahead of his time,” Father Windholtz said. “When he had the church renovated in the time when the priest said Mass with his back to the people, he made sure it featured a free-standing altar. So when the Vatican II changes came a few years later, they didn’t have to remodel the sacristy.”

Included in the 1957 renovation was the addition of transepts and sanctuary as well as the sacristy and rectory.

In addition to all of the spectacular architecture and art surrounding worshippers, Father Windholtz was quick to note that he offers free parking on weekends and that security in the downtown area has  “improved immensely.”

“We make it easy to register,” he added. “We just have a nice simple card they can fill out.”

His small flock is diverse — “we have people from the lower economic levels up to the wealthy,” he said,  and with the increase in downtown apartments, condos and professional level employment, “we’re seeing a lot of young families now coming here.”

“Our people come from many, many zip codes, including Northern Kentucky with the bulk coming from the West End,” he said.

The 11 a.m. Mass “is very high church,” with music provided by a professional choir lead by well-known music director Anthony DiCello. Father Windholtz said attendance at this and other Masses and confessions seems to be on the increase.

“You can measure these things by the amount of money that comes from the collections — attendance is on the increase,” he said.

But the cathedral is a very old building last renovated almost 60 years ago and it requires almost constant repairs.

“We have a four-letter word here,” Father Windholtz said: “R-a-i-n.” The copper-clad pitch roof and the flat roof surface on some parts of the building invite water invasion. The stone base for the steeple needs tuck-pointing, too. It takes considerable time and money just to find where the water enters. It migrates over a number of routes into the intricately painted ceiling plaster, which is quickly and significantly damaged by the water.

“We have an estimate of $300,000 to renovate the pews,” he explained of another item on his wish list. The pews clearly show signs of the wear and tear of the past 50 years.

“The electrical system was put in place with the renovation in the 1950s and should be switched to a more efficient system using LEDs.”

Keeping the historic building, with its many paintings, works of art and Carl Zimmerman Stations of the Cross, from being damaged by humidity requires a constant monitoring of the heating and air conditioning units, several of which date back to the 1980s and the newest of which was installed in 1995. With controls that date back to the 1980s, efficiency is an issue, Windholtz said, recalling that when the system was down for a period of several weeks one summer, the organ was damaged by humidity.

The cathedral has numerous treasures, some of which are housed in a museum room. Bishop Purcell’s horse-drawn coach, vestments that were gifts from a pope to Archbishop Alter, relics and Archbishop Dennis M. Schnurr’s World Youth Day chalice, a gift from Blessed John Paul II, are all on display for those who prearrange a tour.

There are also conference spaces, offices and chapels in the building, many decorated with valuable art and artifacts. The cathedral hosts concerts featuring world-renown performers, the Catholic Schools Week Mass, Lenten Stations of the Cross and newer events like the Blue Mass (recognizing police and fire personnel),  and the White Mass, recognizing nurses, aides, pharmacists and other healthcare professionals.

But while it is a treasure chest filled with precious items and events, Father Windholtz would be most happy if it was filled with parishioners “building their parish community here.”