Although the number of women entering religious life has decreased, young women are still saying “yes” to God’s call with courage, compassion and faith. Together, they are discerning their role in a changing world.

“In Our Own Words,” published in January by Liturgical Press, features the voices of 13 sisters younger than 50, sharing the hopes, challenges, and realities of religious life. They represent different congregations, charisms, ministries, and cultures, and include sisters from communities that are part of the Council of Major Superiors of Women Religious and part of the Leadership Conference of Women Religious.

The book was edited by Society of the Sacred Heart Sister Juliet Mousseau, who made her first vows in 2012 and serves as an associate professor of church history at the Aquinas Institute of Technology; and Sister of St. Francis Sarah Kohles, who professed final vows in 2011, and is currently working on her Ph.D. in biblical studies at Graduate Theological Union at Berkeley. The essays focus on topics such as the vows and community life, individual identity and congregational charisms, and leadership among young members heading into the future.

Among the contributors was Sister of Charity of Cincinnati Tracy Kemme, who said the idea for the book originated at a Giving Voice retreat for sisters in their 20s and 30s, when the discussion turned to what books women in formation were reading as they prepared for vows. The available books and articles are valuable, she explained but were published years ago and written by men and women with experiences in religious life that were vastly different than theirs.

As they talked about the great scholars and writers shaping them in their formation, “we thought about how they were aging and that it seemed no was taking
their place,” the editors write in the introduction. They realized that “no one person could take their places. We need to hear all our voices, in their diversity, united around the topics that are most central to our lives. And so our journey toward writing the book began.”

The authors met for a weeklong writing retreat funded by the Conrad N. Hilton Foundation. The process was both prayerful and collaborative, said Sister Tracy, who professed first vows in 2015 and serves as the bilingual pastoral minister at Holy Family Parish in Price Hill. “We wanted the book to be a model for religious life, where differences in congregations and leadership conferences don’t create division,” she said. “Our time together was so sacred, and I feel like we created a really solid body of writing.

“It was energizing to see our hopes and dreams on paper. Taking part in this really gave me the courage to speak up and consider what God is asking us to bring to religious life at this time.”

Sister Tracy’s chapter is titled, “The Vows and Jesus’ Radical Mission: The Power of Celibacy, Poverty and Obedience for the Reign of God.”

“The vows have had something to offer society in every age of religious life’s evolution,” she wrote. “It’s no different today. Our loving God plants in each sister’s DNA that which is needed for the time and place in which she dwells. I look at our world in desperate need and am convinced that our vows, lived in communion by women religious across the globe, hold transformative power. As Pope Francis insisted in his letter for the Year of Consecrated Life, we can ‘wake up the world.’”

Sister Sarah wrote about the meaning of saying “yes” to religious life in a time of diminishing numbers, saying, “Everything about this choice seems to be a reversal of expectations akin to the reversals found in Hannah’s prayer [1 Samuel 1:11]. Furthermore, our older wisdom sisters are all going to die, and there will not be very many of us left. Some of us have even joined communities in which we have no peers at all. Who signs up for such a life? How can this be life-giving? It makes no sense by any worldly measure. Yet, for us intrepid few, we know this is where we belong. It is somehow in the midst of these impossible situations that God will gift us with life.”

Sister Tracy believes the voices of the young sisters will not only touch others currently in formation, but other women discerning a call to religious life, current vowed members and congregational leadership.

“I think the book is a breath of fresh air for anyone who is excited about the future of religious life,” she said. “It’s valuable for all sisters to have a context for what young sisters think about religious life today and help them put energy into building a vibrant future for their congregations.”

“In Our Own Words” is available at Amazon.com and Litpress.org. 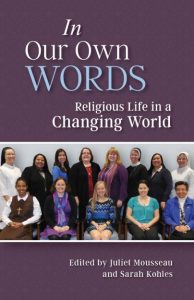