A Catholic Journey to India: Lives of faith, part 2

The people and saints of Karala

Editor’s Note: In July, a small contingent from the archdiocese traveled to southern India to listen and learn about the lives and faith of our brothers and sisters a world away. In the second of a three-part series of articles, Sister Eileen Connelly, CT news editor, reports on their time with the Syro-Malabar Catholic community in Kerala. Look for the conclusion of the series in our December issue.

On a hot July Sunday morning, hundreds of children, ages six to 16 gathered for Mass and several hours of religious education at a Syro-Malabar Catholic Church in Changanacherry in the state of Kerala, India. It was an inspiring sight for visitors from the Archdiocese of Cincinnati and a testament to the tradition of faith that has continued since St. Thomas the Apostle arrived in about 52 AD to organize their first Christian communities

Thanks to arrangements made by Lovely Thomas, a member of the local Syro-Malabar Catholic community, Mike Gable, director of the Office for Mission and the Pontifical Societies, Tony Stieritz, director of the Catholic Social Action Office, and Ursuline Sister Eileen Connelly, news editor, “The Catholic Telegraph,” received a warm welcome to Kerala. They experienced the deep faith and hospitality of their hosts, Josekutty Kuttemperoor, a journalist, and his wife, Sobha, a high school principal. Thomas and her children (Matt, Naomi, Divya, Leena, Gemma, and James) were also in India at the same visiting her parents Poriyath Sebastian and Aleyamma Mathew, and accompanied the travelers as they visited ministries and holy sites and met with church leaders.

First on their agenda was time at Mercy Home, an institute for the disabled, started in 1974 by His Beatitude Cardinal Mar Antony Padiyara, then Archbishop of Changanacherry. More than 500 children have passed through its doors over the years, including artist Swapna Augustine. Born with no arms, she learned to paint with her feet, and her work has since been featured in magazines and exhibitions. While at the home, the Cincinnati group was especially touched by a three-year-old girl, born deaf and visually impaired. She is now learning to walk and communicate under the loving care of the sisters.

Visits to the tombs of two Sryo-Malabar saints provided the opportunity for Gable, Stieritz and Sister Eileen to learn more about their lives and legacies. St. Kuriakose Elias Chavara, ordained in 1829, co-founded the first indigenous religious congregation for men, now known as the Carmelites of Mary Immaculate. His work in social reform included the areas of education and care for orphans, the aged and the dying. In 1846, he established St. Joseph’s Press, the third printing press in Kerala, to publish prayer books and periodicals. This served to propagate Catholic news and literature among all people. He was canonized on Nov. 23, 2014.

St. Alphonsa Muttathupadathu was the first woman of Indian origin to be canonized as a saint by the Catholic Church, and the first canonized saint of the Syro-Malabar Catholic Church. A member of the  Franciscan Clarist Congregation, she was an educator and suffered serious illness for much of her time in religious life. At her canonization ceremony on Oct. 12,

2008, Pope Benedict XVI said of St. Alphonsa: “(Her) heroic virtues of patience, fortitude and perseverance in the midst of deep suffering remind us that God always provides the strength we need to overcome every trial.”

A meeting with His Beatitude Mar George Cardinal Alencherry, current major archbishop of the Syro-Malabar Church, was also inspiring for the archdiocesan contingent. “My dream is for everyone
to live in peace and harmony, working together and helping each other, no matter their religion,” he told them. “We are all equal before God and we all have gifts to share.” The archbishop said he tells his flock that “I’m a Christian with you and bishop for you.”

Gable shared what their time in Kerala meant to the visitors: “The number of Catholic schools and colleges is key factor in making this state among the highest educated populations in the nation. The amazing work of empowering lower caste Indians by Saints Alphonsa and Chavara makes one feel honored to be a Catholic. And that legacy continues today as local religious move into difficult neighborhoods to empower residents to reorganize and drive out crime and hopelessness. The number of programs for job training, day care for children, the handicapped, the elderly, and the abandoned would make St. Thomas proud. What an inspiration to see the Spirit so alive in Kerala!”

For a variety of photos of the trip, click here.
Read Lives of Faith, part one here.

A picture says a thousand words: standing-room only crowd at St. Gertrude

A Catholic Journey to India: Lives of faith, part 2 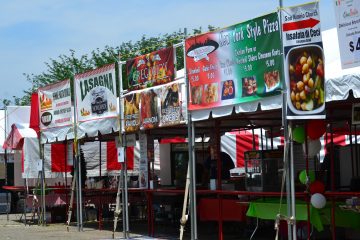