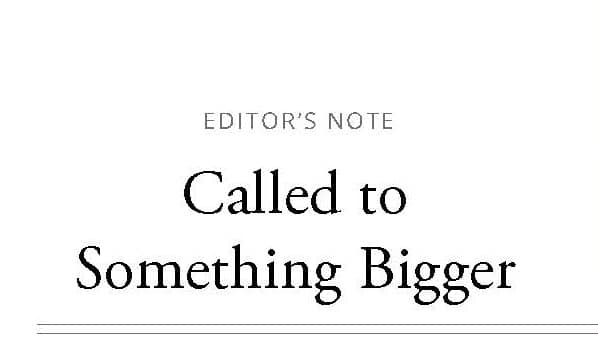 As a tall third grader, I was immediately tapped to play our basketball team’s center position (as the team’s tallest person often is). This meant that I had to make the opening jump ball, which placed me in the very center of the action, and I had to fight other tall girls for rebounds. It was intimidating to my then-timid personality, but my team and coach counted on me. Most importantly, they called on me to do something outside of my natural comfort zone.

The lesson that began those many years ago in third grade basketball became a template for my life. People saw something in me, asked me to step up to the plate, believed I could do it—and so, I did it; often when I didn’t fully believe in myself.

The same experience unfolded in my oldest daughter’s life during fifth grade last year. Volleyball wasn’t popular in our home state, but she wanted to try it here, and thus came to the sport late as a new player. Her first game was a disaster. She went into sensory overload, and I think we both wondered what we had gotten her into—but I didn’t let it show. Running to her on the sideline, I pulled her out of the gym, ran to the store for ear plugs and urged her to go back in. She didn’t want to play, but her coach and teammates insisted she could, so she continued.

The whole volleyball season was rough; she felt inadequate next to seasoned players and doubted her ability. But before the season’s last game, I sat her down and told her that I admired how much she practiced in the backyard and I knew she could do it. In a total mom move, I even offered to get her a Frappuccino after the game if she just went for it and put it all on the line without reserve.

Lo and behold, she was amazing! Every parent in the stands asked me what changed (and promised future frappes for that kind of playing). I had encouraged my daughter to trust herself and step up to what she was called to do—and she finally realized she could. Her coach and team wholeheartedly supported her, and she finally cast aside the imposter syndrome.

And it’s not just people who ask. God has asked, and continues to ask, the same from all of us, over and over again. When we were discerning the move 850 miles from Shreveport to Cincinnati to launch The Catholic Telegraph magazine, my dear friend mailed me a card that said, “Be strong. Be brave. Be fearless. You are never alone. – Josh. 1:9”

It’s a tall order, isn’t it, the task of being strong, brave and fearless in the face of the unknown? Or in fighting off imposter syndrome when God calls us to do big things for which we don’t feel qualified or good enough. But from my experience, it’s a little bit easier when you have a coach who believes in you, a team who cheers for you and you know that God is calling you to something bigger.

Being Pro Life: The Beauty of Adoption