The moral character of students is hard to quantify.

No metrics or standardized tests can tell how a school is performing in its goal to create students who love their neighbors as themselves — but anecdotal evidence helps.

Month after month reports flood the inbox of The Catholic Telegraph with stories of Catholic school students putting the needs of others ahead of themselves.

“Catholic Schools Week is not just an opportunity to display the excellence of our Catholic schools but is an opportunity for our students to demonstrate their commitment to improving the world around them,” said Jim Rigg, superintendent of Catholic Schools. “These type of efforts, which are typically student-led, show how our students are committed to making the world a better place.”

Below is a glance at the recent efforts of several archdiocesan schools in the area of philanthropy.

Students at St. Ursula Academy collected 27,000 pounds of food and donated it to Greater Cincinnati area non-profit groups that feed the hungry. The food filled 599 boxes and in addition, the students raised $1,400 in cash. The donations went to St. Vincent DePaul, Mercy Neighborhood Ministries, Madisonville Education and Assistance Center, Little Sisters of the Poor, and Open Door Ministries. The organizations planned to use the donations for assistance with family meals during the holidays.

Carrol High School earned $1,600 for prostate cancer research by participating in “No Shave November” for the male students. The student-driven idea involved the boys not shaving during the month of November.

Bishop Fenwick High School students collected spare change during religion classes in early December to raise money for the Sandy Hook Promise Foundation. Fenwick raised $300 for the foundation, and students wore green on Dec. 13 to honor the victims of the now-infamous school shooting.

The students and adults of Fenwick also engaged in a prayer service.

THE POWER OF PENNIES

In mid-December, Ascension in Kettering raised $1,800 through a “Penny Power” competition. Through Catholic Charities, the money was used to buy gifts and Meijer gift cards for three families in need. The students also donated money to the Mobley family, neighbors of the church, who suffered losses in a house fire.

In early November, students at St. Teresa of Avila School in Price Hill donated more than 600 pieces of candy to “We Care,” an organization that creates care packages for soldiers overseas.

This article originally appeared in the February 2014 print edition of The Catholic Telegraph.

Archbishop Q&A with students touches on many topics 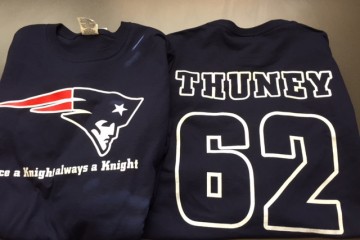