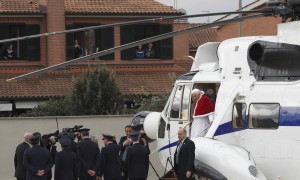 VATICAN CITY (CNS) — Pope Benedict XVI asked nuns, brothers and priests not to listen to the “prophets of doom” who say that consecrated life has no future or that it has no meaning in today’s world.

“Do not join the prophets of doom who proclaim the end or the lack of meaning of consecrated life in today’s church; rather clothe yourselves with Jesus Christ and put on the armor of light … remaining awake and vigilant,” Pope Benedict told consecrated virgins and men and women who belong to religious orders.

Pope Benedict XVI celebrated Mass with the religious Feb. 2, marking the feast of the Presentation of the Lord and the World Day for Consecrated Life.

In a darkened St. Peter’s Basilica, 50 superiors of men’s and women’s orders carried lighted candles and processed into the church before Pope Benedict, who rode in on a mobile platform carrying his own candle.

The special Mass also marked the Year of Faith. In previous years, Pope Benedict observed the feast day either by leading evening prayer with the religious or joining them after a Mass celebrated by the prefect of the Congregation for Institutes of Consecrated Life and Societies of Apostolic Life.

With thousands of consecrated men and women filling St. Peter’s Basilica, the pope said he wanted to ask three things of the world’s religious during the Year of Faith.

First, he said, they should meditate on that “‘first love’ with which the Lord Jesus Christ warmed your hearts, not to be nostalgic, but to fan that flame.”

“To do this, you must spend time with him, in the silence of adoration, and then you will reawaken the desire and the joy of sharing his life, his choices, his obedience of faith” and “the radical nature of his love,” the pope said.

The pope also asked the religious to recognize “the wisdom of weakness,” modeling themselves after Christ who emptied himself completely out of love for God and God’s creation. “In the joys and afflictions of the present time, when the difficulty and weight of the cross make themselves felt,” he said, recognize that “precisely in our limits and human weakness we are called to live in conformity with Christ.”

In modern cultures that value efficiency and success, he said, the humility and poverty of religious life are “Gospel signs of contradiction” and ensure that religious can empathize with and become a voice for the voiceless.

Pope Benedict’s third call to religious was to “renew the faith that makes you pilgrims moving toward the future.”

Rather than listening to those who think that giving everything to Christ is meaningless or who see the declining numbers of religious as a sign that consecrated life will disappear completely, he said, religious must live their lives seeking the face of God.

“Let this be the constant yearning of your hearts, the fundamental criterion that guides your journey, both in your little daily steps as well as in important decisions,” he said.

As eviction crisis looms, priest highlights the legal needs of the poor