Little Sisters of the Poor: Elderly care for 150 years in Cincinnati

A religious community devoted to caring for the most needy elderly has much reason to celebrate.This Saturday October 20th, the Little Sisters of the Poor will mark the 150th anniversary of the community’s arrival in the United States.

St. Paul’s Home for Aged in Clifton is the second home founded by the Little Sisters, who trace their roots back to France.

It was in 1839 that the now St. Jeanne Jugan opened her heart and home to an elderly, blind and paralyzed woman in need. Inspired by the Holy Spirit, she devoted her life to the care of the elderly poor, founding a new religious community in the process — the Little Sisters of the Poor. St. Jeanne’s vision spread, and in September 1868, seven Little Sisters arrived in Brooklyn, N.Y. to establish the community’s first home in the United States. Within four years, they had started 13 homes. Today, the Little Sisters minister to the elderly, regardless of race, religion or nationality, in 27 homes across the United States. They also have an international presence in countries such as Columbia, New Zealand, Italy, Kenya and India.

St. Paul’s Home serves as the residence for nearly 100 men and women ranging in age from 65 to more than 100 years old. To meet the varying needs of new residents, as well as the changing needs of those progressing through the aging process, the home includes independent living and studio apartments, as well as skilled care and custodial care rooms.

“We’re very excited to be able to celebrate our anniversary,” said Sister Mary Imelda Rangel, who serves as assistant to the superior, vice president of the house, and as a supervisor on a skilled unit. “It’s just a real source of joy to know that we’re still serving 150 years later. Our mother foundress is keeping us strong in our desire to serve the elderly.”

The community’s ministry is especially rewarding, Mary Imelda said, “because we are able to give of ourselves to them, to give them the care they need, to make them happy.”

The greatest reward, she added “is being here for them until the end. They know we’ll be with them when the Lord is ready to call them home.”

Sister Mary Imelda also spoke of the interaction between the sisters, staff and residents, no matter their level of care. “Everyone knows everybody on the various floors,” she said. “The residents and staff become family. That’s what we try to instill in all of our houses — that family spirit, because we truly all become one.”

Every year on Aug. 30, the Little Sisters celebrate the feast day of their foundress. In 2018, this date also marked the beginning of the jubilee year celebrating the sesquicentennial.

For the homes whose individual sesquicentennials fall between August 2018 and 2019 – Queens, Cincinnati, Baltimore, Louisville, St. Louis and Philadelphia — the celebrations will be held in public venues.

The local community has planned a Mass of Celebration with residents, family and friends on Oct. 20 at 11 a.m. at St. Monica-St. George Parish. Archbishop Dennis M. Schnurr will be the celebrant.

For the homes established after 1869, local “at home” celebrations are being organized.

A focal point of each celebration will be a traveling “pilgrim” tapestry that portrays St. Jeanne Jugan on her rounds in the Breton countryside and represents her living presence in each community of Little Sisters.

A special invitation to young people is also planned to encourage them to take advantage of the jubilee year to foster connections with the elderly.

Looking to the future, the Little Sisters have chosen to use the sesquicentennial as time for reflection and strategic planning, dubbing the initiative “Quickening the Flame,” a reference to the charism of their foundress as a living flame they wish to pass on to future generations. 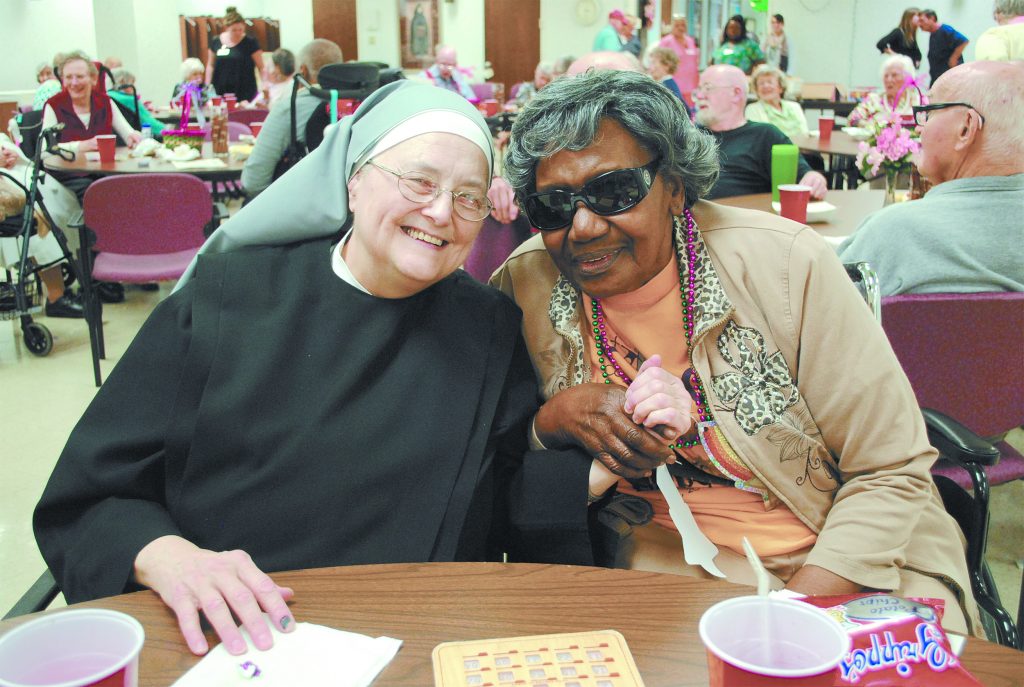 Giving up your seat at God’s table

Little Sisters of the Poor: Elderly care for 150 years in Cincinnati