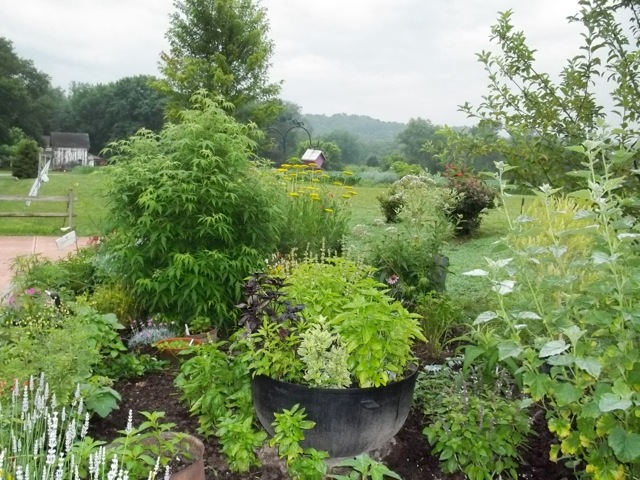 Syndicated columnist Rita Nader Heikenfeld is the author of several cookbooks, and writes a weekly cooking column and blog (AboutEating.com) for Greater Cincinnati Community Press newspapers. An adjunct professor at the University of Cincinnati, a Certified Culinary Professional and Certified Modern Herbalist, the Culinary Professional for Jungle Jim’s Eastgate, and a 2014 inductee to the Escoffier Hall of Fame, she also has a cooking segment every Thursday on the “Son Rise Morning Show” on Sacred Heart Radio.

Heikenfeld devotes part of the large herb garden at her Batavia, Ohio, home to Bible herbs and the Virgin Mary. “I’ve always felt that an herb garden needs a statue of Mary, even before I had ever heard about Mary Gardens,” she said. When first learned about the medieval tradition, she realized that it was exactly what she wanted in her garden: “a place of quiet beauty where one could pray and think about our Mother.”

Heikenfeld says that any kind of and size of garden can be a Mary Garden, and that a tiny container garden can make a great Mother’s Day gift. “Dad and the kids can go to the garden center and choose a few of these plants,” she said. “Put them in a container with a small statue of Our Lady, as a wonderful gift for Mom. If there’s time, have the container blessed.”

Many of the flowers in Heikenfeld’s Mary Garden are edible, so that she can use them as garnishes for her dishes.

Roses (any variety)
“Roses are always appropriate for a Mary Garden. She is called the First Rose of Martyrs, and the rose was also adopted as the emblem of Mary’s love of God.”

Mint, Fennel and Dill
“These are all Biblical tithing herbs that are great in cooking.”

Mary’s Bedstraw (Galium verum)
“This is a low-growing perennial that looks like what might have been put in the manger. My statue of Mary stands on the bedstraw.”

Day Lillies (any variety)
“These are an type of lily, but most lilies represent Our Lady for her purity and chastity – white lilies, especially. The Angel Gabriel is often shown holding a lily.”

Cilantro
“The seed of this plant, Coriander, is sometimes mentioned as the manna of the Bible.”
Rosemary
“Supposedly, this herb was named Rosemary because Mary tossed her blue cloak over the bush and the flowers turned blue. This is a piney-tasting herb full of antioxidants.”

Oregano/Hyssop
“These are generally thought of as two different plants, but some scholars say that what’s referred to as hyssop in the Bible is actually a kind of oregano. Moses told the Israelites to dip a branch of hyssop in lamb’s blood to mark their door posts at Passover. Oregano is a strong-tasting herb that holds up during long cooking times.”

Flax
“Used to make linen, flax has beautiful blue flowers. The shroud of Turin is linen made from flax.”

Snapdragon
“Another edible flower, snapdragon is called “Infant Jesus’ Shoes” because the blooms look like shoes.”

Marigold (various varieties)
“I like Calendula, an edible member of this family that I use in my homemade spa products. The name ‘Mary’s Gold’ is also used for common marigold, and for sunflowers.”

Rose of Sharon
“Yet another edible flower for the Mary Garden. It’s useful as a background bush.”

Mints
“A Mary Garden wouldn’t be complete without mint, which is a Biblical tithing herb, but any variety of mint can quickly take over a garden, so be careful to contain it. Try a mint called chocolate mint, it smells like a Peppermint Patty and grows lower than traditional mints and so is good for containers.

Pansies
“Another edible flower, these were known a ‘Our Lady’s Delight.’

Forget-Me-Nots
“A beautiful blue, the flowers remind us of Mary’s eyes.”

Thyme (many varieties)
“This herb grew wild in the hills of Jerusalem. Try one of the ‘creeping’ or ‘steppin’ thymes, both low growing.”

Costmary (Tanacetum balsimata)
“I love this herb – it’s called the Bible herb because folks used to put a leaf in their Bibles to keep them awake during long sermons. It has a balsam-like aroma.”

To Enter The Catholic Telegraph’s Show us your Mary Garden Contest, click here

Show us your Mary Garden Contest 2018