Parishioners and students at St. Ignatius of Loyola in Monfort Heights delighted in an early November visit from Archbishop Christophe Pierre, the Aposotlic Nuncio to the U.S.

The occasion for Archbishop Pierre’s visit was the 50th anniversary of the dedication of St. Ignatius’ present church building, but the visit was a blessing on multiple fronts.

While in town, Archbishop Pierre met with and blessed St. Ignatius pre-Kindergarten children as well as their soon- to-be opened classrooms. He also confirmed eighth-grade students during Masses at the Cathedral Basilica of St. Peter in Chains, had an hour-long question-and-answer session with seventh-grade students and celebrated Mass with St. Ignatius teaching staff.

Each moment with the pope’s ambassador was special, but the blessing of the new pre-school classrooms had additional significance. Now in its second year, St. Ignatius’ pre-school had yet to find its permanent a home for its 99 pre-school and pre-Kindergarten students. They considered a building across the street, but, eventually they converted the parish meeting rooms behind the church. Now, a former maintenance area in the back of the main school building has been renovated. Students hope to begin learning in the new rooms after Christmas break.

“We are looking forward to integrating our pre-school rooms into our main school building in the near future,” said Denise Schnurr, director of St. Ignatius’ pre-school. “We will all be under one roof, our learning community together. We also will be able to establish relationships with our big sisters and big brothers and learn from the older children at school.”

Preparing the students for the nuncio’s visit was not only educational, but fun.

A nuncio’s role is to serve as an ambassador of the Holy See to an assigned nation.

“We started talking with the children about a month before his visit,” said Schnurr. “We learned the song ‘Frère Jacques’ because we knew he was French and we wanted him to feel welcome.

“We also created a special gift for him and His Holiness Pope Francis,” she said. “It was a painting on a small canvas using each child’s fingerprint to form the shape of the cross using blue and yellow, our school colors. The nuncio also blessed the children and the teachers. He then sang a song to us in French.

“The children warmed up to him right away and had much to share with him, as 5-year-olds generally do. It was truly a special moment for all of us.”

At a Nov. 6 Mass, Archbishop Pierre spoke directly to school staff. He acknowledged that Catholic schools like St. Ignatius educate the whole person and added that an educator’s role is that of a guide.

“In the course of the journey of faith, the student, entrusted to our care, will have to verify whether the faith, and its promise of eternal life corresponds to his or her heart’s desire,” Archbishop Pierre said. “They will have to ask questions. This involves, on our part, taking a risk – the risk of freedom. The young person must be guided to use his or her freedom along the journey. This is your vocation – to lead and guide them. The Church is counting on you.” 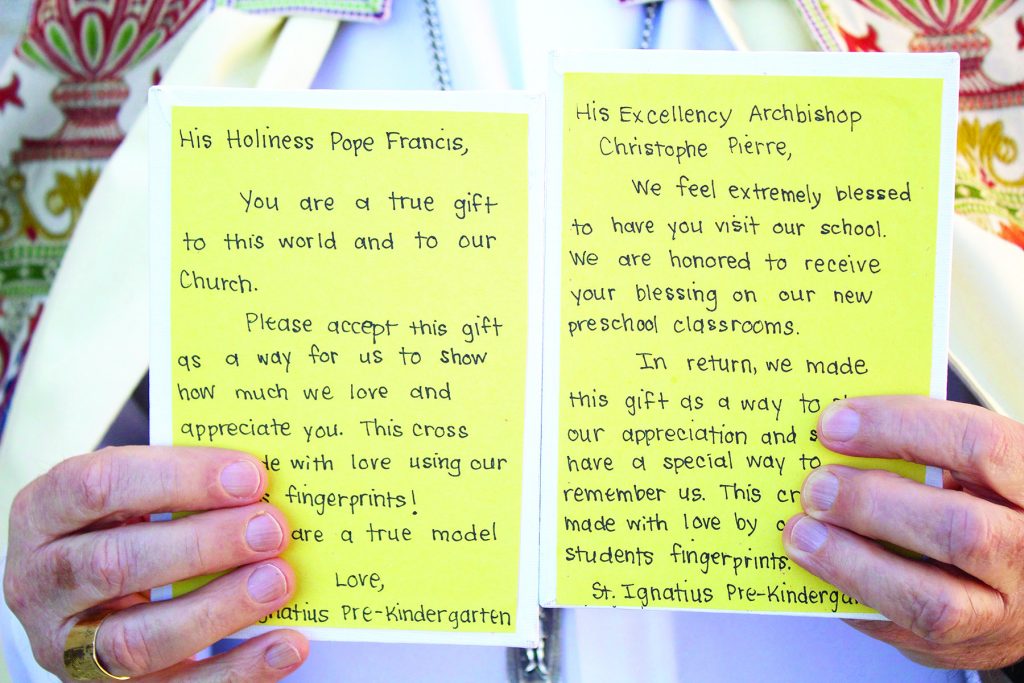 Priests for Life’s Frank Pavone: ‘The next pope can reinstate me’ to the priesthood

Canon lawyer on Father Pavone’s dismissal from priesthood: Only the Pope can issue a decision without appeal