FERGUSON, MO. — The Archbishop of St. Louis rejected violent responses to a grand jury’s decision not to indict a Ferguson police officer who killed a teenager, asking instead for prayer and action to solve underlying community problems.

“Since the grand jury received the case in August, we have seen offensive and violent outbursts by protesters, and acts of civil disobedience. Despite our calls for peace, which Michael Brown’s family have echoed, we continue to see that segments of our community have not fully renounced the tendency to lash out with antagonistic behavior and violence,” Archbishop Robert Carlson of St. Louis said in a response to the grand jury’s decision.

“I implore each of you: Choose peace! Reject any false and empty hope that violence will solve problems. Violence only creates more violence.”

Riots erupted overnight in the St. Louis suburb of Ferguson, Missouri, after a grand jury decided not to indict Darren Wilson, a white police officer, for the killing of Michael Brown, an unarmed black 18-year-old, in August.

Wilson shot Brown multiple times following a confrontation with Brown and his friend. The incident has elevated racial tensions amid allegations of police brutality and excessive force, with contradictory claims about the facts, including whether Brown had his arms up in a gesture of surrender when he was shot, and whether Wilson acted in self-defense.

The town of Ferguson, along with other communities surrounding St. Louis, had erupted in demonstrations and protests following the shooting. In the days after the shooting, some protesters engaged in looting and other crimes against property, including the burning of a convenience store.

Missouri Gov. Jay Nixon had declared a state of emergency on Nov. 17 ahead of the verdict and civil authorities in Ferguson prepared for the possibility of violent reactions to the verdict.

Though unrest has been a part of the community since the shooting, Monday’s riots were reportedly the worst yet, with stores being looted and burned and at least 61 arrests made overnight, as well as at least 14 injuries reported.

Archbishop Carlson has repeatedly called for peace but has also asked for dialogue to begin on many “deeper underlying issues” surrounding racism in communities across America.

In his Monday night response to the ruling, he deplored the violent riots currently underway but added that communities still need to heal from plagues of poverty and racism, which can only happen through prayer and positive action.

“Please pray. Pray unceasingly for peace,” he exhorted. “If you feel called to act, do so only after prayer. Blessed Mother Teresa knew the proper formula. She spent a holy hour in prayer every day; it was only after prayer that she would serve. So, too, must it be for us.”

The archbishop challenged the community to “commit to learning how to truly love each other.”

He asked community leaders and law enforcement personnel to be instruments of peace, saying, “We must be leaders who can come together to address issues like family breakdown, racial profiling, quality education, abuses of authority, lack of gainful employment, fear of one another, mistrust of authority, and many other needs. We must ask the tough questions and find lasting solutions.”

In particular, he called the youth to reject violence. “Are you sowing seeds of division, resentment, and discontent? These will only lead to anger and hatred,” he warned.

“Choose instead to sow seeds of reconciliation, dignity, honor, and respect. Begin creating the world you want to see. Do not listen to those who instigate aggression. Reject violence. Embrace peace.”

The archbishop will be celebrating a votive Mass for Peace and Justice on 5 p.m. Tuesday at the Cathedral Basilica of St. Louis. He invoked the intercession of Our Lady Un-doer of Knots as he asked for prayer for the Ferguson community and especially for the families of Michael Brown and Officer Darren Wilson.

“I urge everyone to join me in praying for the Brown family as they continue to grieve the loss of Michael, as well as for police officer Darren Wilson and his family. Both families need prayers now more than ever,” he implored.

Year of Consecrated Life to open with Mass Nov. 30 in Dayton 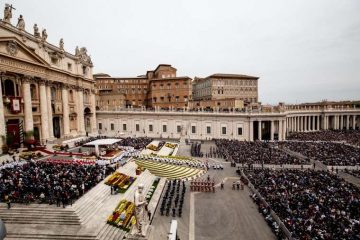