Six of the seven football playing Catholic high schools in the Archdiocese of Cincinnati will play in the second round of the playoffs this weekend and thanks to the way brackets worked out, at least one will see its season end.
Below is a breakdown of the games taking place tonight and tomorrow.

Elder (8-3) vs Hilliard Darby (9-2)
Elder entered the playoffs as the No. 5 seed in Division I, Region 2 and reached the second round with a tight 50-42 victory over Fairfield last week. Hilliard Darby ended the regular season with two-straight losses but advanced with a17-10 win over Lancaster.
The Panthers — a moniker used by both teams — will kick off at 7 p.m. at the University of Dayton’s Welcome Stadium on Saturday.

St. Xavier (7-4) vs Colerain (10-1)
The Bombers enter week 12 after a 28-14 upset of Gahanna Lincoln. The No. 9-seeded St. X now comes face to face with Colerain for the second time this season. The Cardinals advanced with a 53-7 routing of Dublin Coffman last week.
Colerain edged St. Xavier 13-10 in overtime way back in week two of the season. Later, the Cardinals would suffer their only loss to La Salle, a team St. X would go on to beat.
This game is certain to be one of the most watched in the region when the two football powers kickoff at 7 p.m. at Mason’s Dwire Field at Atrium Stadium on Saturday.

La Salle (9-2) vs Lima Senior (9-2)
The top-seeded Lancers had no trouble with Butler last week, winning 52-14 to advance. Lima Senior on the other hand won a 44-42 overtime contest against Miamisburg to eke into week 12.
The Lancers look to continue defense of their 2014 state championship with kickoff at 7 p.m. tonight at Kettering Fairmont Roush Stadium.

Fenwick (11-0) vs Alter (10-1)
Bishop Fenwick just can’t get out of conference play. After a 10-0 season the Falcons were greeted with league rival Badin in week one of the playoffs. A 14-7 win sent Fenwick to week 12 where the face another GCL Co-Ed team in Archbishop Alter.
Alter defeated Reading 52-17 last week to advance.
Fenwick is responsible for Alter’s only loss this season, beating the Knights 24-0 back in week four. Kickoff is Saturday at 7 p.m. at West Carrollton DOC Stadium.

Throwback Thursday: Youth and the Body of Christ

Back to the catacombs: New emphasis placed on bishops' simplicity pact

Catholics in Europe react to Russia’s invasion of Ukraine 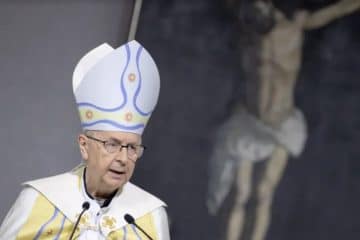