By Sarah Anne Carter
For The Catholic Telegraph

By moving about seven miles from its current location, one parish hopes to greatly expand its capacity for both parishioners and ministries.

St. Mary Catholic Church in Franklin had a groundbreaking ceremony March 8 in Springboro for a new church building.

The current church was built in 1913 and only has seating for about 240 people, according to Deacon Steve Bermick. The parish has about 1,000 families that attend the parish and there are five masses every weekend.

The new church building will seat about 850 people, which should reduce the number of masses a weekend to four.

“I feel the hand of God moving us to the future,” Father Manning said. “It’s going to be an awesome project. We are in growth mode. The whole project is providential.”

The building will have a traditional look to it and the stained glass windows from the old location will be brought to the new location, along with the Stations of the Cross and statues.

The new location will put the parish in a key place of growth for the Dayton area.

“The location is perfect,” Fr. Manning said. “This is the center of major growth for the archdiocese in the next 20 years because it’s a place of growth in our area. The Austin Pike Landing area is really taking off.”

Discussions on the need for a new church building began in 2004 under the leadership of former pastor Father Chuck Mentrup, according to Bermick. After Father Mentrup died in 2006, Father  Manning was appointed pastor, and he continued the discussion. A consulting firm, the Institute for School and Parish Development, was hired to assist the parish in the discernment process.

The new building will have a parish center, offices, a kitchen, a youth area and classrooms in the basement, which walks out to an area with three ponds. The lot is 17 acres.

“We can expand our ministries and reach more,” said Doyle Key, parishioner and part of the building committee. “There will be more space to allow our youth group to grow and we’d like to see it grow quite a bit.”

JoAnn Key, also a parishioner and building committee member, said they would be able to do more with religious education.

The Keys have been helping out with Wednesday night dinners for the homeless and are hoping to not only expand that at the new location, but continue having them in the old location as well.

The old buildings will be sold, but if the new owner does not want to continue the dinners there, the Keys said there are several organizations that have offered the use of their buildings so the dinners can continue.

“Half of the homeless in Warren County are in Franklin,” JoAnn Key  said.

“Parishioners are excited about the expanded worship space that the church will provide,” Bermick said. “A good number of them have to stand during Sunday Masses and the new church will have plenty of room for people to have seating. The parish life center will modernize staff offices and classrooms to better serve the parish community. Parishioners are really looking forward to the new campus.”

This story originally appeared in the May 2015 print edition of The Catholic Telegraph.

Throwback Thursday: Every bishop was first ordained a priest

My Journey: Saints were her ‘gateway drug’ 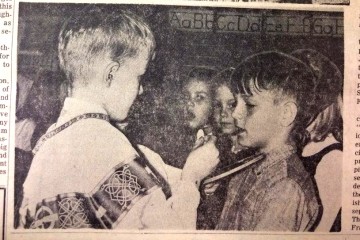