The Catholic Moment: The pillars of formation for today’s priests 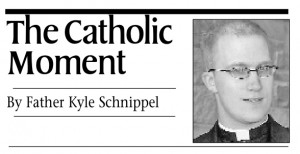 Back when I was in the college seminary and the vocation director would visit, I was always a bit skeptical of his noticing that ‘we (seminarians) have grown so much’ since the time of his last visit.  I could notice some growth that we were going through, but was never too sure how that was coming across to others; especially when my family would ‘require’ me to come home every once in a while to bring me back to reality!

Certainly, we were growing!  And the person who I was when I entered seminary formation at the age of 19 as a sophomore in college became a much different, and hopefully much more mature person by the time I was ordained to the priesthood eight years later.  The irony is now thick that I now serve as vocation director and have echoed to our seminarians the same that was said to me: I see tremendous growth and hope in the men we have in formation for the priesthood in the Archdiocese of Cincinnati.  They will light things on fire!

While it is true that every 27 year old is a much different person than they were at 19 years of age, there are some specific things that happen in seminary that help to speed along and deepen that process.  The initial recognition is that while the seminary calendar is built around an academic calendar, there is much more that happens than studying!

The document that guides and directs seminary formation in this country is called the Program for Priestly Formation (PPF), now in its fifth edition.  Taking the vision the Blessed John Paul II outlined in Pastores Dabo Vobis, this document gives the shape and structure to all the seminaries, at the high school, college and post-college level.

The unique contribution that the PPF brings is that it highlights four ‘pillars’ or aspects of formation for today’s seminarian: academic, spiritual, pastoral and personal formation.  In brief terms, academic formation is learning the ins and outs of the faith so that the future priest can present the teachings of the faith in all their beauty.  Spiritual formation is the growth in prayer that is required of a man who will lead others in prayer.  pastoral formation is the awareness that he needs to put this faith and prayer into action, bringing the sacraments to the homebound, teaching, helping others to walk their journey of faith.  Finally, personal formation is recognizing that every man who presents at the seminary has his own unique set of gifts and talents that God is potentially calling for use in the priesthood, how does he develop those gifts and talents while also allowing God to work through his weaknesses?

What we can see in this brief sketch is that we are aware that seminary formation involves the whole man, not just his mind or his soul.  To be a priest is to be totally conformed to the will of Christ; hence the seven to nine years of formation that is required prior to ordination, it takes a while to shape the heart in such a dynamic way

As I often say, however, whatever applies to the priest also applies to the Catholic.  Using the dynamics of seminary formation can be a wonderful model for lay Catholics to also increase their love and devotion to Christ and to the church; for if we are all aware and concerned about growth: academically, spiritually, pastorally, personally; the world could be a much different place!

This program, adapted to the needs of each person, could well put us on the way to the reform called for under Pope Francis, for true reform in the church begins not with changing structures and teachings, but with the changing of hearts, my heart, one day at a time.

What keeps me Catholic? Surprise

The Catholic Moment: The pillars of formation for today’s priests