Rigg is currently director of curriculum for the Diocese of Colorado Springs and principal of Divine Redeemer School in Colorado Springs. The appointment follows the recommendation of a search committee and a nationwide search.

Rigg succeeds Marianist Brother Joe Kamis, who was appointed assistant provincial of the United States Province of the Society of Mary.

“I have immensely enjoyed my career so far in Catholic education,” Rigg said. “I greet each day with joy and gratitude that God has placed me in a Catholic school system. I am a staunch believer in the unparalleled value of a Catholic education and how Catholic schools can fulfill the mission of our church to spread the teachings of Christ. I have already been impressed by the quality of the schools within the Archdiocese of Cincinnati. I look forward to joining such a vibrant and Christ-centered community!”

Rigg has overseen instructional programs of the schools of the Diocese of Colorado Springs since 2008, in addition to his position as principal of Divine Redeemer Catholic School since 2005. In five years as leader of the school, he effectively doubled its enrollment, created new sources of financial aid, increased the financial viability of the school, and shepherded it through a process of becoming the first Catholic school in the state to be accredited under a new program.

He is also an affiliated professor at Regis University in Colorado Springs. His previous positions include part-time principal of St. Peter Catholic School in Monument, CO, while still at Divine Redeemer; principal of St. Joseph Catholic Elementary in Memphis, TN; adjunct professor at the University of Memphis; dean and teacher at Bishop Byrne Middle/ High School in Memphis.

He graduated from the College of the Holy Cross in Worcester, MA, with a bachelor of arts degree, earned a master’s in education from the University of Notre Dame, where he was part of the Alliance for Catholic Education program and holds a doctorate in educational administration from Capella University in Minneapolis.

The Archdiocese of Cincinnati has the eighth largest network of Catholic schools in terms of enrollment. The 19-county territory includes 115 Catholic primary and secondary schools.

The promise of new life at Easter 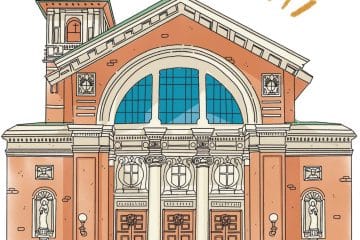