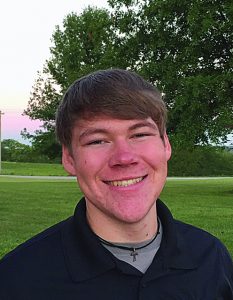 Ben Sinkhorn was inspired from his earliest years by the example of his parents, Virginia and Robert, both active volunteers in their community and at their Indiana parish. Following in their footsteps, the recent graduate accumulated more than 800 service hours during his four years at La Salle High School.

Many members of his extended family attended La Salle, and when Sinkhorn visited during his high school search, “it just felt like the right fit. I was impressed by the five Lasallian pillars (leadership, service, faith, scholarship, community) and how the teachers and students lived them out in their daily lives,” he said.

Highlights of his community service efforts at La Salle include immersion trips to Appalachia and New Orleans; serving as a Kairos retreat leader and technology coordinator for the school’s canned food drive; serving as Lancer for Life president and organizing participation in the March for Life; and taking part in Big Brothers, Go Do Good, and the Key Club. Outside of La Salle, he has helped organize service trips for his parish and has helped other parishes that have needed retreat leaders.

“Until recently, I hadn’t really thought about why I do service,” Sinkhorn admitted. “Applying to colleges forced me to think about it. If I see a need or someone that needs help, I don’t question it. I just take action. It’s just in my nature to help people.”

“Ben is doing what comes naturally to him,” said Angie Frigge, communications and marketing manager at La Salle. “He performs service not because it is required, but because it is the right thing to do. As Catholic educators, we try to teach our students by example; living as Jesus calls us to live. Ben, in my opinion, is a great example of Catholic education. He lives a life for others. He is one that realizes that his faith is shown by actions to help others, especially the less fortunate.”

Sinkhorn’s commitment to service will continue as student at Xavier University, where he hopes pursue a major in human-centered making, which focusing on developing design, product engineering and critical thinking skills with an emphasis on empathy. “I enjoy helping others and using computers. This seems like a good way to serve others and use technology.”

Looking back on his time at La Salle, Sinkhorn said, “I wouldn’t trade it for anything. It’s been great. I feel well prepared academically, and the Lasallian values have been a foundation for the person I’ve become and where I hope to go in life.”

Pentecost is celebration of unity in diversity, pope says